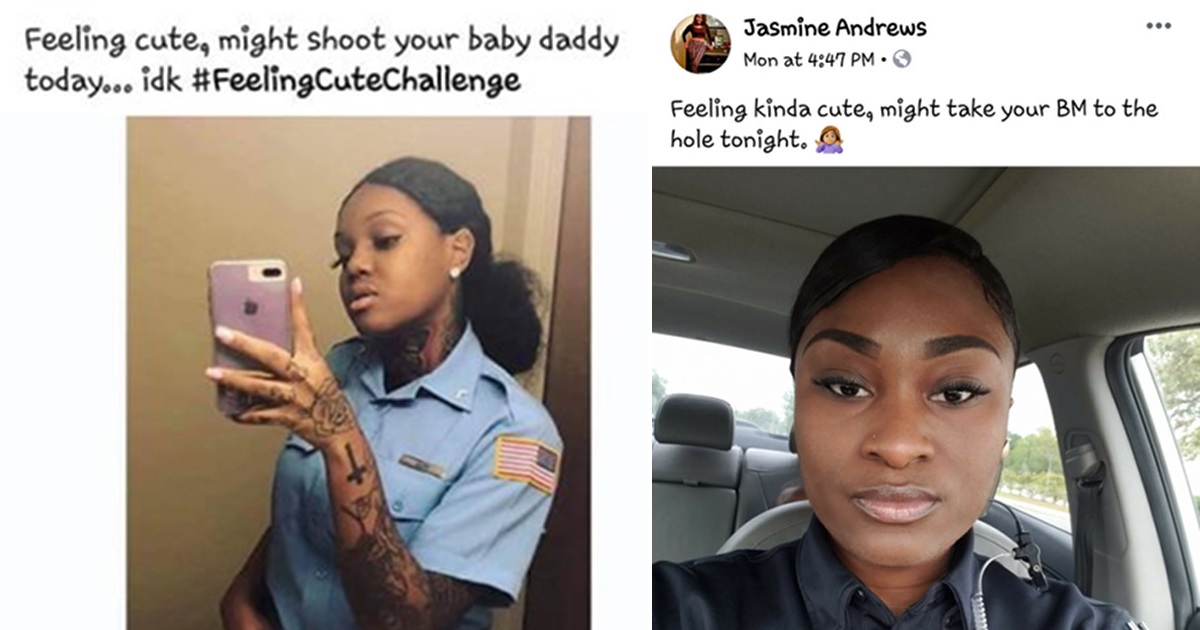 Correctional officers across the country are facing heavy backlash, even getting fired, for threatening to mistreat inmates while trying to be funny and participating in the popular #FeelingCute challenge.

#FeelingCuteChallenge among correctional officers from several states in #USA have in mind that several inmates are abused in the prison system all over USA every day and then tell me if you think this is cute or funny!! @Martina @CarolinaE1962 @solitarywatch @UNHumanRights pic.twitter.com/shmMrJIhnc

Many of the problematic posts could be found in a now-private Facebook group, “Correctional Officer Life.”

Dozens of officers in Texas, Georgia, Oklahoma, and Missouri have been called out by social media and reprimanded by their departments for their not-so-cute meme posts.

According to America’s Police Problem, the unsettling memes range from “officers stating they may shoot people, plant drugs, use force, or leave inmates in the shower for [an] excessive amount of time.”

whether you call them Prison Police, Guards, CO's, whatever, when they take their "thoughts" to social media and denigrate those that are incarcerated & their loved ones, we ask- how can they DO THEIR JOBS WITHOUT BIAS? answer, they cant and should be relieved of all duties

America’s Police Problem, a site dedicated to police accountability and abuses of power, has compiled nearly 40 instances of correctional officers taking the hashtag to a “dangerous level.”

The site’s post identifies the officers, provides links or screengrabs of offending posts, and in several cases, also includes their workplace or the city in which they patrol/live.

“Each one of these officers took an oath to honor the constitution, yet their actions on social media either break that oath or borderline break it,” the site states.

On Wednesday (Apr. 17), prison officials in Texas, Georgia, and Oklahoma confirmed to The Washington Post that they were aware of the viral trend and investigating the matter.

Jeremy Desel, spokesperson for the Texas Department of Criminal Justice confirmed to People that four of its officers were fired due to their #FeelingCute posts and two others had resigned because of outrage over their posts.

Desel said in a statement:

“Currently six of the more than 25,000 correctional officers employed by this agency are under investigation for on and off-duty conduct violations as a result of the alleged posting of inappropriate photographs on social media.

“These officers in no way represent the thousands of TDCJ employees who go to work every day taking public safety seriously in all ways.”

A spokesperson for the Missouri Department of Corrections confirmed they were investigating a corrections officer after they wrote: “Feeling cute. Might take your homeboy to the hole later.” The “hole” refers to solitary confinement.

The #FeelingCute hashtag being used by correctional officers is a take on the viral “feeling cute, might delete later” hashtag.

It was first adapted as workplace meme by UPS employee Courtney Muse, who wrote “Feeling cute, might deliver your package later, idk” on March 30th.

Outrage over these posts that have taken an innocuous hashtag too far comes on the heels of extreme mistreatment of inmates.

Inmates in a Brooklyn prison were left without power and little heat for over a week in February. And last year, Milwaukee officers were charged after a mentally ill inmate died after allegedly being denied water for one week.