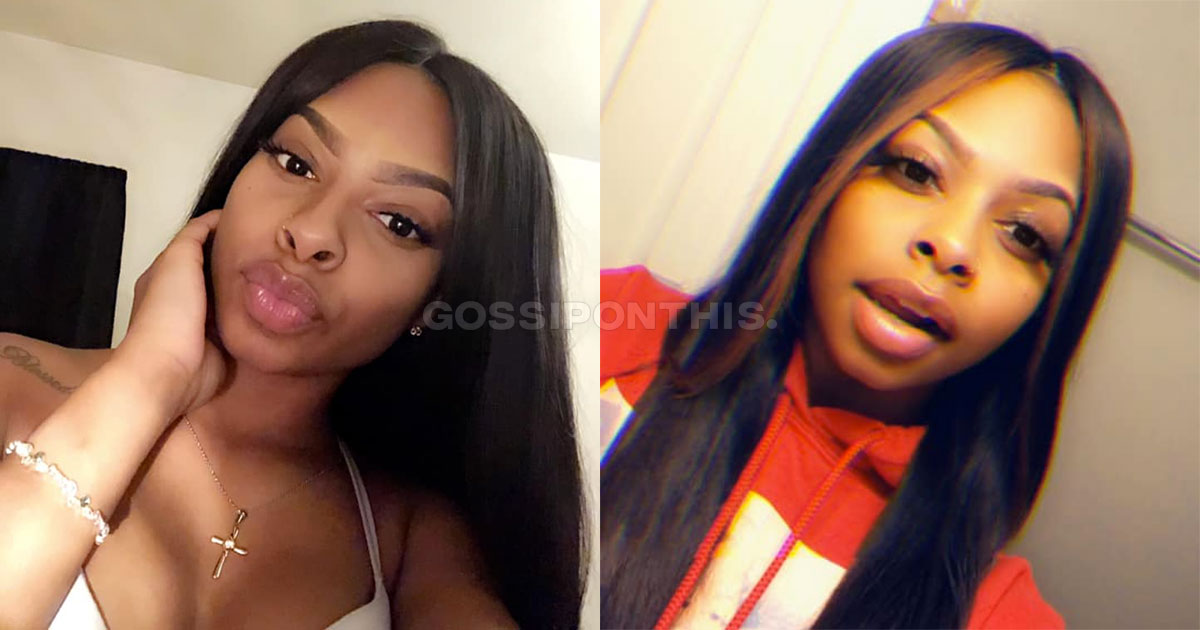 An Illinois teen is dead after she was stabbed in the neck during a fight that was reportedly provoked by a new “anonymous” Facebook game.

19-year-old Charee Alexander of Peoria, IL died Friday (Apr. 12) after somehow becoming involved in a fight the day before.

According to Alexander’s mother, she wasn’t even the target of the fight, she was just there as an innocent bystander supporting her sister who had gotten into an altercation with another girl.

Social media posts suggest Alexander’s sister was beefing with a group of girls over comments left on a new Facebook game called “Profoundly” that allows people to ask questions and/or leave comments for others anonymously.

The girl who received the anonymous comments blamed Alexander’s sister, which set off a horrible chain of events.

Here’s the backstory, according to a friend who was there when Alexander was stabbed (emphasis ours):

“Before everybody gets on here lying and trying to make a truth. We NEVER wanted to fight. Shatiya didnt want to fight lexis from the jump because all she wanted to do was fight over a dude.

“Lexis came to shatiya job twice trying to fight her.. calling her manager trying to get her fired all over nothing. We decided why not get it over with instead of looking over our shoulder all summer all because somebody was insecure enough to fight over a ni**a.

“Yes we came deep only because we knew how they got down. There was a CLEAN fight nobody jumped in shatiya took her wins all 3 times and we were Done. Nobody got jumped nobody needed to use a weapon.. Alexis even came and tried to fight me but Reece wouldnt let anything happen..

“The knife was brought out once Jacolby came and she just had to go after charee.. This all started because Alexis thought we were the ones sending her messages on the anonymous game when we were all busy the day her and HER FRIENDS decided to make a status about shatiya.

“So before yall try and make it seem like shatiya was fighting [over] a dude. Evaluate yall friends and everybody on the other side. We lost our friend. And idc enough to do facebook anything but let us Grieve in peace and stop trynna make yall own stories period. Keep yall fake apologies and turn yall friend in” 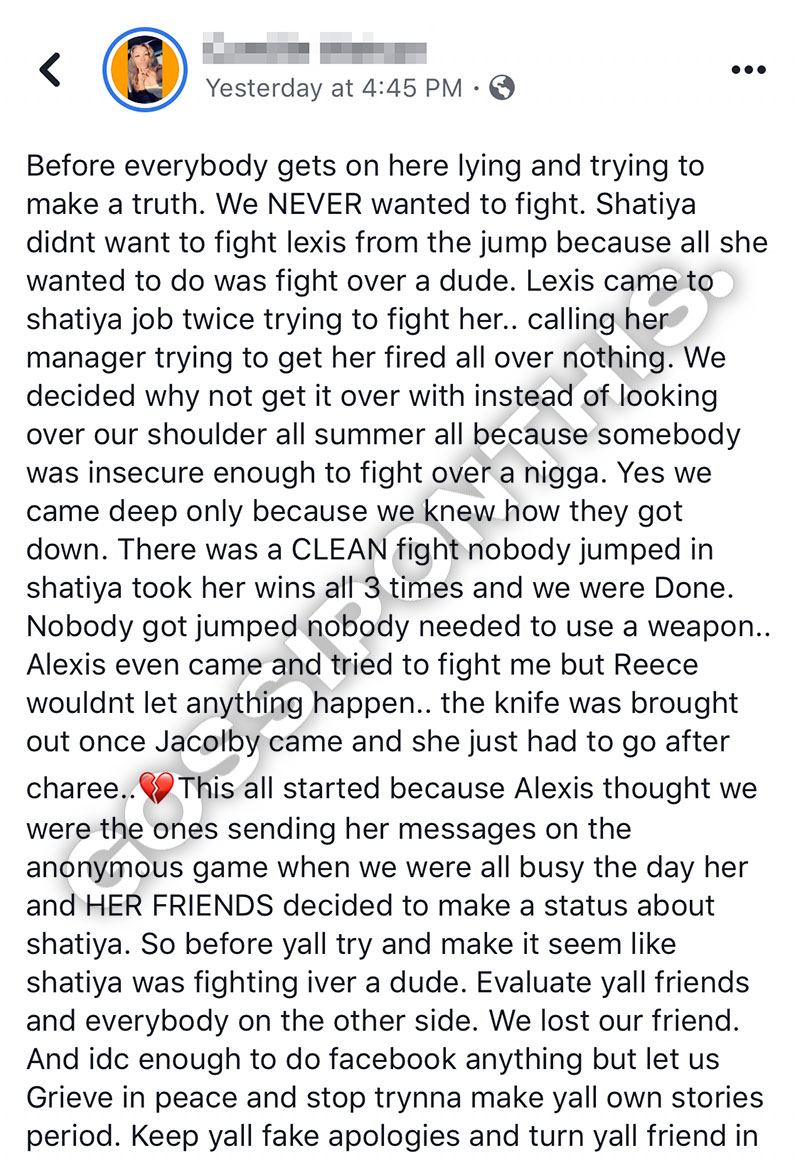 Via the Journal Star:

“She just had her nails, hair and toes done. She wasn’t fighting. She doesn’t have a scratch on her from the fight,” said Sherrce Abbey, the mother of Charee A. Alexander, who was pronounced dead at 2:05 p.m. Friday after being stabbed in the neck the day before.

Alexander, her mother said, was at Schmoeger Park on Thursday afternoon to support her sister who was involved in a melee with another girl. Instead, the “girly girl,” the one who was always concerned about how she looked and stood by her friends, was stabbed in the neck. She was rushed to the hospital, but her injuries were too severe.

“They told us at eight in the morning, but we had to wait until they pronounced her at 2:05 p.m. They had to wait to have the chemicals and the anesthesia out of her. It was horrible. I was strong for my kids, but I would go downstairs by myself and cry,” she said.

According to Peoria police, officers were called to the park, located at 3400 N. Western Ave., on a report of a large fight. Additional calls were received indicating numerous fights happening simultaneously, spilling into the street and into yards.

While responding, officers stopped a vehicle leaving the area and inside was the woman who was stabbed. She was taken to a hospital, bleeding profusely from a stab wound to the neck. Alexander was on life support until being pronounced dead.

Her mother said her daughter’s organs were donated because “that’s what she would have wanted.”

[Peoria County Corner Jamie] Harwood declined to rule on a cause of death, saying that would come after an autopsy. A teenage boy, Alexander’s nephew, according to Abbey, was also stabbed. He suffered a non life-threatening injury. His condition wasn’t known Friday night.

Her boyfriend of five months, 20-year-old Brylin Greene, said Alexander was a kind, compassionate person who would do anything for her friends. She had just graduated from high school and working at the mall. Her dream was to become a hair dresser, he said.

“She was really smart, generous and cared a lot about the people she loved,” he said.

Alexander leaves behind a 3-year-old daughter named Kyla, who now has lost both of her parents. In December 2016, the child’s father and Alexander’s boyfriend at the time, Deven Lee, 18, was gunned down in the 1800 block of North Indiana Avenue in Peoria. It was hard on Alexander and her friends. Her mother said Alexander was the type to keep friends for a long time.

Another friend, Sara Martin, said Alexander’s death was like losing “Deven all over again.”

Martin watched Kyla while Alexander would go to work. She was close friends with her and Abbey and is “heartbroken” over the stabbing. But she’s also upset that Kyla will now not have her parents to guide her.

“She’s not going to be expected to make it in this world, but we are going to make sure of that. She’s got a lot of people around her who are going to help.”

As for her friend, Alexander, neither she nor Greene know what happened. They said it was not in Alexander’s character to get into a fight. “She was small. If you looked at her, she looked like she was 16,” they both said.

Wow… This Facebook/social media stuff is getting out of hand!

The saddest part of this whole thing is that there’s a little girl who has lost not just one, but BOTH of her parents at young ages over senseless violence.

A sad situation all around, really.