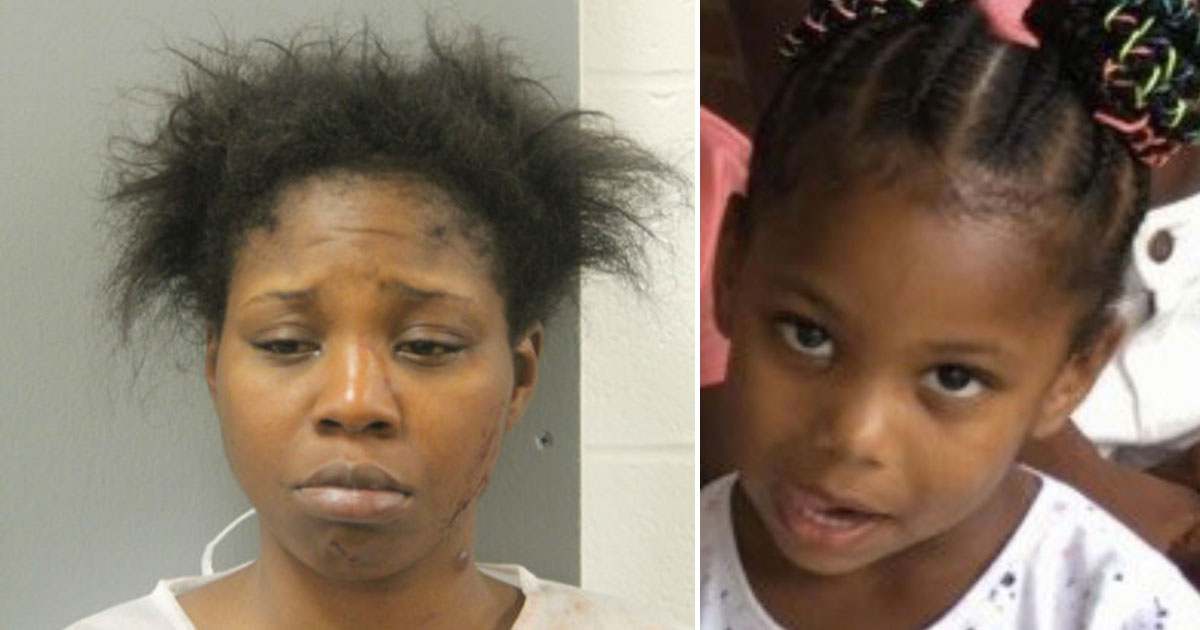 Prosecutors said 27-year-old Simone Austin was at home Saturday morning (Sep. 26) with her two daughters when she asked the 8-year-old to leave the room.

She then pulled out a serrated knife from underneath a pillow and repeatedly stabbed her younger daughter, Serenity Arrington, in the neck as her sister watched from the keyhole in the door.

The 8-year-old girl ran into the room to try and save her sister, yanking her mother’s hair and trying to pull her off of the girl, as the 5-year-old apologized and begged her mother to stop.

The older girl then ran out of the East Garfield Park apartment where she, her sister, and Austin had been living with Austin’s father and started screaming that her mother had killed her younger sister, prosecutors said.

The girls’ grandfather had left the home to grab coffee with friends and returned after the stabbing to find his 8-year-old granddaughter screaming for help, telling him that “mommy stabbed her little sister.”

Prosecutors said Austin then carried Serenity’s limp, bloodied, naked body outside and laid her down in the grassy area next to the sidewalk in plain view of neighbors.

One neighbor, who is also a friend of the grandfather, said he was riding his bicycle down the street when he saw Serenity on the ground and her mother kneeling by her feet.

He said Serenity was bleeding profusely from a gash in her throat and Austin had blood all over her face and shirt.

When paramedics arrived, Austin reportedly told them that she “did it” and “was sorry.”

Serenity was rushed to the hospital, where she was pronounced dead.

The Medical Examiner determined the girl’s cause of death to be “multiple incise wounds to the neck and one to the shoulder.”

According to the ME’s records, one of the girl’s stab wounds was so deep that it was almost fully through to the back of her neck.

Austin was charged with first-degree murder and is being held without bond.

Prosecutors were unable to give a possible motive for the brutal slaying during Austin’s bond hearing Monday (Sep. 28), but Austin’s 8-year-old daughter did mention a prior incident in which her mother paced around with a knife in her hand after she and her sister spilled eggs on the porch.

“And you never know what can happen,” one prosecutor told a judge, recalling the 8-year-old’s statement to investigators.

The Illinois Department of Children and Family Services said they’d been called to the home in the past, but details weren’t immediately available.

Brown said the officers with his department will “forever be haunted” by what they witnessed Saturday.

“The murder of a child at the hands of their parent is too much to contemplate,” he told WGN9. “We pray and grieve for this precious child.”

Chicago Police Chief of Detectives Brendan Deenihan added in a separate statement to CBS Chicago: “Keep that child in your thoughts and prayers, because this will obviously be with her for the rest of her life.”

Austin—who left her job at Walmart back in May—had no criminal background, but detectives said they were looking into whether she has a history of mental illness.

Austin’s defense attorney said Monday during her bond hearing that she was forced to drop out of high school after her freshman year because she was homeless at the time, the Chicago Sun-Times reported.

Austin is due back in court on October 19th.