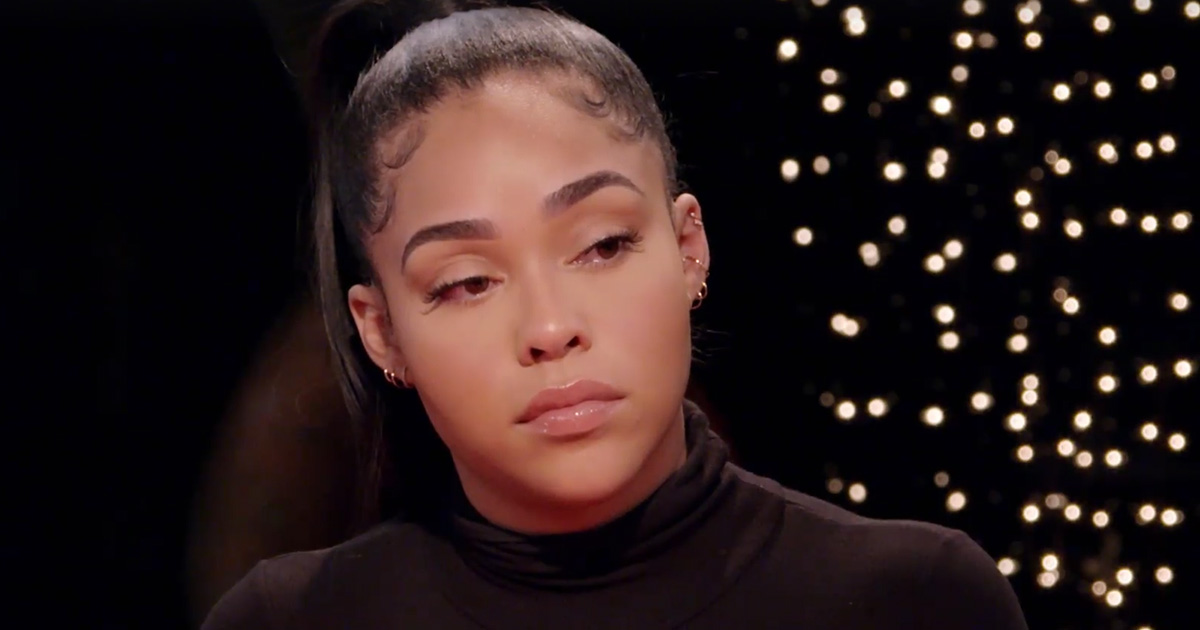 As far as the Kardashians go, they are certainly no angels. But just because the Kardashians have gotten their come up by doing hoe shit, doesn’t mean that they can’t call foul when someone in their inner circle violates the girl code.

And yet, for some reason, black social media is flocking to the defense of Jordyn Woods in the case against Khloe Kardashian under the guise of, “They’re picking on a black girl.”

After hiding from the masses for a good minute, Jordyn finally broke her silence by sitting at her Auntie Jada’s red table for a little filmed therapy session. But here’s the problem: Jordyn didn’t tell the full truth.

Oh, I know that she said she did and she even offered to take a lie detector to prove she was telling the truth, but I don’t believe her. Here’s why.

Throughout her session with Jada, Jordyn keeps saying, “I’m not trying to paint myself as the victim,” but that’s precisely her end-game when you listen to her testimony. According to Jordyn’s version of events, the only thing she did wrong was go to Tristan’s house for the after party.

But I’m fairly certain the thing she did wrong was get physically intimate with Tristan Thompson, her best friend’s sister’s baby daddy. Khloe would’ve been fine with Jordyn going to the party but what Khloe and none of the Kardashians expected was for Jordyn to do anything romantic with her baby daddy. The dangling of the legs on each other and the “kiss” they exchanged are at the heart of the issue. Be accountable for that.

Now hold up, this is where Jordyn really lost me during the Red Table Talk episode. Her words to Jada were: “I was drunk. I was not tipsy. I was drunk, but I was not beyond the point of recollection. I know where I was. But on the way out, he did kiss me. No passion—no nothing—on the way out. He just kissed me. It was a kiss on the lips, but no tongue kiss, no making out. Nothing. And I don’t think he’s wrong, either, because I allowed myself in that position. And when alcohol’s involved, people make dumb moves or people get caught up in the moment.”

So in this whole story you concocted, you admit that you’re pissy drunk and you admit that you stayed out partying until the wee hours of the morning, and yet you’d have us believe that Tristan Thompson, a known freak-a-leek womanizer, just kissed you on the lips good-bye with “no passion?”

That unbelievable lie is an insult in and of itself, but for her to then go to the trouble of ABSOLVING Tristan, when she’s claiming he kissed her lets you know that Ms. Jordyn is hiding something. She’s covering up for Tristan because she knows that whatever went down that night or has been going between the two of them for a while now, is why Tristan felt comfortable kissing her on the lips.

Jordyn wants to have her cake and eat it too. She wants to appear honest but she also doesn’t want to throw Tristan under the bus because she knows that if she does, that might provoke him to speak out and really reveal the extent of her deceit and betrayal.

Willow Did Not Have Time to Hear Jordyn’s Bullshit

For this episode of Red Table Talk, Jada took on the task of interviewing Jordyn by herself. Her mom briefly made an appearance in the intro to the show, but most notably absent was Young Willow Smith. My theory: With Willow being a millennial like Jordyn, she was too hip to the bullshit to sit there and fake the funk, so she told her mama, “Nah, girl. I’ma sit this one out.”

Willow, as we all know, has an all-seeing third eye and when that third eye sees bullshit, she stays well away from the mess.

So, yeah. Jordyn Woods’ story is a whole-ass lie and yet many black people are caping for her because they’re mad that the Kardashian/Jenner girls routinely and repeatedly date/marry/breed with black men.

Some people, however, have rightly pointed out that many of the Kardashian/Jenner girls have been accused of doing exactly what Jordyn did: Sleep with a friend’s man or ex-man. Point in case: Khloe Kardashian linking up with French Montana when he was definitely boo’d up with Trina.

Trina, being the petty diva that she is, quietly posted an IG post saying she was “minding the business” she gets paid to mind, but The Shade Room pulled the receipts and sure enough, Trina says that she found out about Khloe and French when the world did. In fact, he was living with her when he started linking up with Khloe behind her back.

So if you want to go after the Kardashians for being hypocrites, then OK. But don’t sit up here and actually believe that cock and bull story Jordyn is trying to peddle on your Facebook Newsfeeds because that fable is watered down horse shit that was given air time only because the Smiths wanted to defend a family friend. PERIODT.