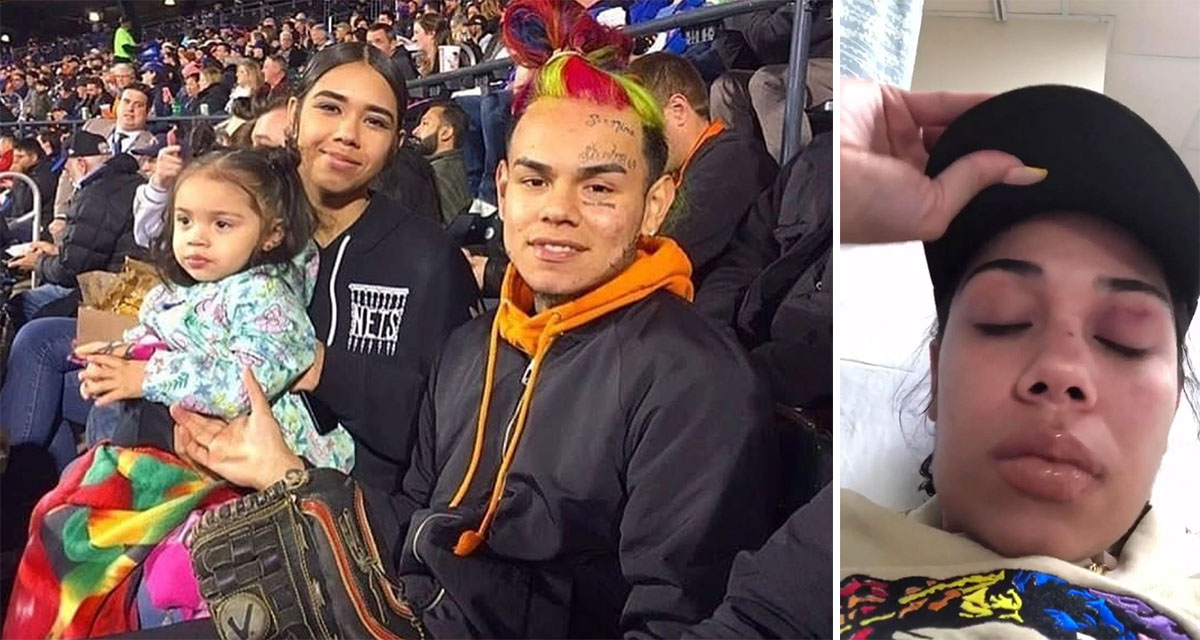 As it stands, most people didn’t have a flattering perception of Tekashi 6ix9ine, aka Danny Hernandez. He has made his name in hip-hop as an abusive, vitriolic, provocative, rainbow-haired troll.

But new details emerging from an interview that his baby mama, Sara Molina, gave to The Daily Beast, shed light on just how nasty the Mexican-American My Little Pony truly was behind the scenes.

The interview is long and worth the full read, but here are some of the juiciest tidbits recounted by Molina:

1Sara Molina said Tekashi 6ix9ine beat her so bad one time her head started to “leak blood” all over hotel pillows.

Tekashi 6ix9ine’s ex-girlfriend said the first beating at the hotel in Dubai came shortly after she arrived from New York.

“He punches me out of nowhere,” 23-year-old Sara Molina said of the October encounter.

She said she was surprised only by the lack of warning.

The rapper—who cut a deal last month with prosecutors to flip on fellow members of a violent gang—had beaten her often during their seven years together, a harrowing history she recounted for the first time to The Daily Beast.

This particular punch drove a hair extension clip into her scalp.

“So I was leaking blood,” she recalled. “There was blood on the hotel pillow cases. He got scared.”

Molina, who has a young daughter with Tekashi, had just taken a 14-hour flight and she told him she now would be taking another one home.

“He basically was telling me I can’t, he was sorry,” she said. “He convinced me to stay.”

He had been sleeping when she arrived but he had no sooner wakened than he was going through her phone. He demanded to know about a particular guy. She had not failed to see pictures that had been posted online of him cavorting in Dubai with two young women.

“And he’s punching me in the head because of a guy talking to me,” she noted.

3Tekashi 69 had lots of unprotected sex and contracted several STDs.

Apparently, Tekashi confessed to being riddled with STDs. And then he beat her again for hours on end. I know love is blind, but is it immune to genital itching too?

She said Tekashi accused her of allowing his manager, Kifano “Shotti” Jordan, to seek more than her friendship.

He apparently hoped to elicit a confession from her by confessing himself to sleeping with more than 70 other women in the past year, resulting in multiple pregnancies. She said he told her he had acquired multiple STDs.

“Basically, he admitted to me he is a sex addict,” she told The Daily Beast.

46ix9ine beat Sara Molina for 2 hours and forced her to have sex with him right afterward.

Snowcone Head was apparently convinced that his manager, Shotti, was boning his baby mama and basically wouldn’t stop hitting her until Molina confessed to creepin’ with Shotti.

But she could not confess to what she had not done. She said that he then announced he was giving her one more chance to admit what had not, in fact, ever happened.

“I’m going to ask you again, has Shotti ever tried to come home to you?” she recalled him demanding.

Then, she said, he commenced the second beating.

“He started to punch me again,” she said. “He started beating me for two hours straight.”

He seemed suddenly stronger, more ferocious, more determined not just to hurt but to injure than during the previous beatings, she said.

“He had the craziest look in his eyes,” she remembered. “I was scared. ‘Why is he acting this way?’ I had never seen him like that. He punched me so hard in my right ear I thought I was deaf.”

She said the punches were joined by kicks and that every time she tried to scramble to the door, he pulled her back. She began to scream and he pressed a pillow over her face, knowing that she has a fear of being suffocated, she said.

“This was his way of telling me to stop screaming,” she figured.

They ended up on the bed.

“He put his arm around my neck and started choking me,” she remembered. “He said, ‘I just have to make an example. I can’t have you out there, making me look stupid.'”

She had been drained of the strength to leave. She was still there beside him in the morning.

She went into the bathroom and stood before a mirror.

“My face was so swollen,” she later said. “It was so bad. I could barely open my eyes.”

She had two black eyes and her right ear was purplish black, she said. Her arms and back were covered with bruises.

“I tried to cover my face with makeup and I couldn’t,” she said. “Nothing was working. I didn’t bring makeup on my trip to cover up black-and-blue. He told me, ‘Tell me what you need. I’ll go to the mall and get it.'”

5Tekashi beat Sara in front of their daughter.

Worse, apparently Tekashi got violent with Molina in front of their little daughter while they were in New York:

They were in the car when Molina had the temerity to speak about a young woman who had called her saying she was pregnant with Tekashi’s child.

Molina said the manager, Shotti, had offered the woman $30,000 of his own money, but she had declined, saying she was not interested in cash but in being with Tekashi. The young woman sent Molina a photo of her and Tekashi together lest anyone doubt her.

Molina said their daughter, then 2, began screaming and crying when Tekashi started beating her in the car. Shotti, by her account, pulled Tekashi off her and demanded, “Are you crazy?”

As Molina tells it, she was unable to return home to her family with a battered face if she wanted to avoid igniting an uproar. She and her daughter instead moved in with Tekashi and his mother in an apartment in Crown Heights in Brooklyn.

6Molina said 6ix9ine beat her AGAIN, this time after she asked him about online reports accusing him of sleeping with a stripper.

She said the rapper also eventually kicked her and their daughter out of his house, which ended up saving them from a police raid.

She says the battering did not stop after the birth of their daughter and incident in the car that left the child crying and her too battered to go home.

As a result, Molina was living with him in August, when he came home at 5 a.m. following a jaunt with a stripper that was documented online. Molina again had the temerity to ask an obvious question. She says he responded as before.

“He was very aggressive,” Molina recalled. “He didn’t want to talk about it. He dragged me by my hair and slapped me in my face, which caused the black eye.”

The black eye is one that appears in a series of photographs she took in the aftermath while wearing a black baseball hat [see above].

The following month, Tekashi issued from long distance eviction orders that landed Molina and their daughter on the street in early morning darkness.

She ended up back in Williamsburg at a hotel, and that saved her and Saraiyah from being at the apartment when federal agents and cops raided it several days later. The search is said to have produced an assault rifle and a backpack containing the identification of a visit of armed robbery.

7Sara said Tekashi beat her yet again after he was forced to cancel a video shoot because of a drive-by shooting.

In early November, Tekashi was in the company of a young woman named Jade out in Los Angeles. A drive-by shooting cut short the filming of what was supposed to have been a music video featuring Kanye West and Nicki Minaj along with himself. He arrived back in Long Island in the morning.

Molina said he then beat her yet again. She again took photos, this time while wearing a white baseball cap [see above]. She decided she had suffered enough and was done with him.

In the meantime, Tekashi attempted to part ways with Shotti and the 9-Treys by announcing on a radio show that he had fired his manager and entire entourage. The FBI came to see Tekashi and informed him that his life was in danger. A wiretap allegedly picked up the 9-Treys speaking of killing their erstwhile golden goose.

Tekashi told Molina that she and their daughter might also be in danger. He added that he was going to be spending time with Jade, but only as a diversion, heroically diverting the attention of their enemies from Molina and their child.

Molina understood that Tekashi was making excuses, but the danger seemed real enough. She was hiding out in a hotel when she learned that Tekashi and his onetime 9-Trey pals had been arrested for racketeering.

Tekashi was remanded, but nonetheless arranged for Jade to get an expensive car for Christmas. He got nothing for Molina, nothing for their daughter.

Again: Tekashi 6ix9ine being a piece of shit to his baby mama isn’t totally surprising, but the details of his torture and abuse of her are jarring, nonetheless.

The good news is his lowdown, dirty, criminal ass is already behind bars and poised to be there for some time. The bad news is it sounds like the only justice Molina will get for the abuse Tekashi dished out to her will be in the court of public opinion.

Kudos to Molina for speaking her truth and shedding light on what clearly has been a very dark chapter in her life.

For so long, Tekashi thought he could do what he wants to whoever he wants but it’s funny how God and the government learned his ass the way. Or should I say Tr3y way?