The quick 30-second TV spot shows the devastation of the world after Thanos’ snap—empty houses, empty stadiums, a poster about missing people, etc. Long story short: EVERYTHING IS GONE.

But our heroes won’t let this get them down. The surviving Avengers team up and train to prepare themselves to save the world from Thanos’ destruction. 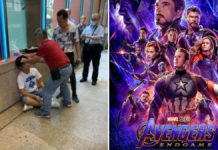