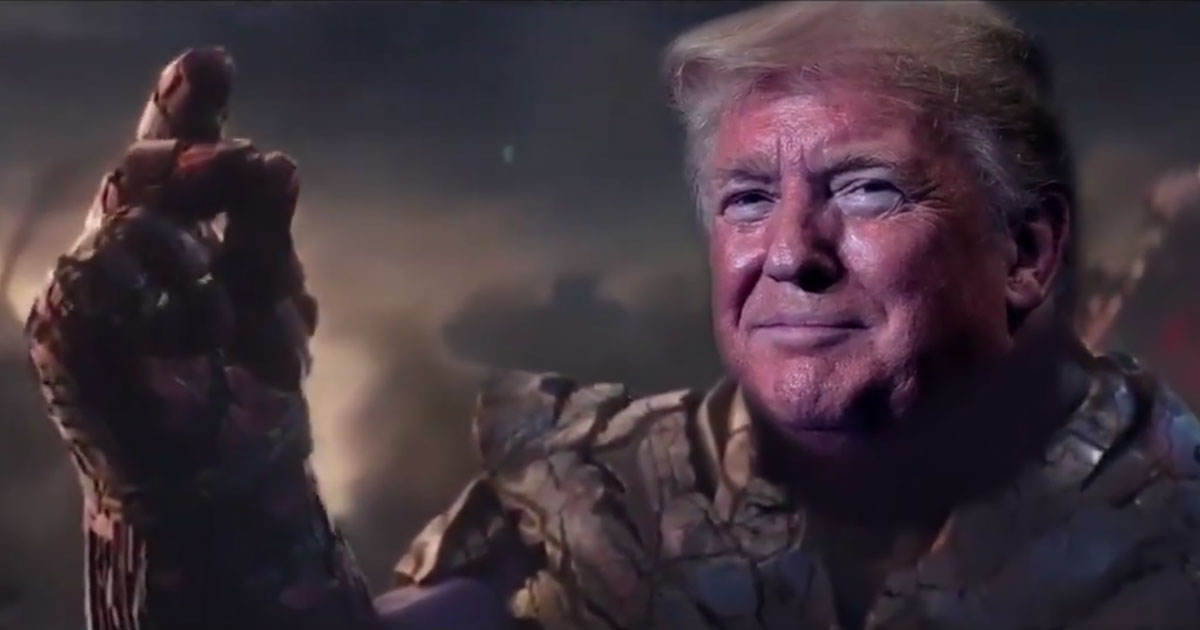 In a move that can only be described as … “interesting” … Donald Trump’s re-election campaign released a video Tuesday (Dec. 10) likening the President to “Avengers” supervillain Thanos. You know, the same guy who wiped out half the universe simply by snapping his fingers.

The footage shows Trump’s head superimposed onto Thanos’ body. And when he does the infamous snap after declaring his inevitability, the video cuts to footage of House Speaker Nancy Pelosi and other Democratic leaders disintegrating into dust, just like the climax of 2018’s “Avengers: Infinity War,” as they introduce articles of impeachment against the President.

“House Democrats can push their sham impeachment all they want,” the tweet from Trump’s campaign team read. “President Trump’s re-election is inevitable.”

House Democrats can push their sham impeachment all they want.

We’re not sure exactly what type of image Team Trump was trying to portray, but this certainly ain’t it.

Not only are they comparing Trump to a genocidal maniac who killed billions of people, tortured one daughter and murdered another one, but as many Twitter users hilarious pointed out, they’re not even using the right scene from the right movie.

The scene they’re using actually happens near the end of 2019’s “Avengers: Endgame” (the “Infinity War” sequel and the final movie in the series) when Thanos realizes he’s been tricked and defeated by his superhero enemies before he dies himself.

Y’all know Thanos said that before he lost, right? https://t.co/hhDj51yzyj

2: That same warlord killed half the universe, tortured one daughter, and murdered the others.

3: This is the scene where Thanos realizes he’s been tricked and defeated. https://t.co/qV62rVm26i

You know… the villain who wants to MURDER HALF THE UNIVERSE.

And depicts him killing the Democrats. https://t.co/xoUjscFZR9

So you're arguing that Trump is Thanos ("The Mad Titan") who wants to kill half of all living things, but in the end winds up defeated and dying, taking all of his sycophantic followers down with him?

The Trump campaign is now comparing the President to Thanos, the genocidal villain from The Avengers. This is bizarre. Even for them. (And they leave out the part where Thanos loses in the end) https://t.co/Cc4cWp1dbe

He was the BAD GUY, btw.

Did you watch the movie??? This is the snap that doesn't work because Iron Man stole the Infinity Stones moments before. https://t.co/Ot52aiB0yR

Meanwhile, Jim Starlin—the guy who created Thanos in 1973—said Trump’s team equating him to a fictional mass murder is disturbing, to say the least.

“After my initial feeling of being violated, seeing that pompous fool using my creation to stroke his infantile ego, it finally struck me that the leader of my country and the free world actually enjoys comparing himself to a mass murderer,” Starlin said in a statement.

“How sick is that? These are sad and strange times we are going through. Fortunately all things, even national nightmares, eventually come to an end.”