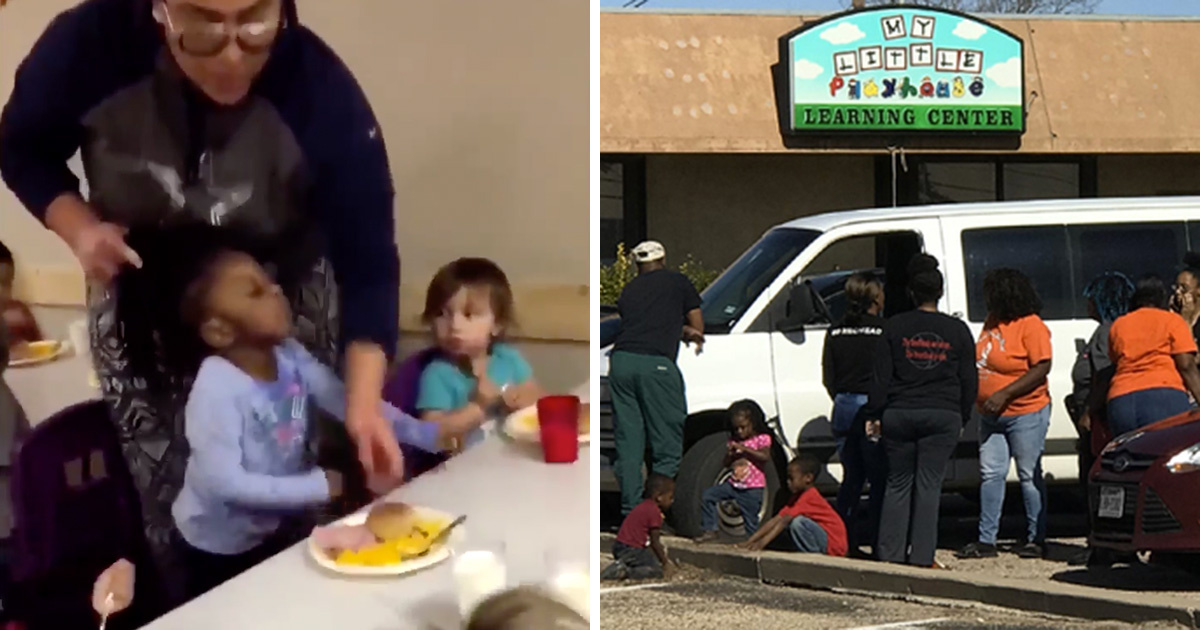 Disturbing video footage showing a daycare worker in Texas yanking a little black girl by her hair has gone viral on social media, and the two women involved have been fired.

The video shows a woman pulling the child by her hair as the little girl dozes in and out of sleep at the lunch table.

“Stand up!” the woman yells, forcing the child upright, as another woman behind the camera giggles.

“Olivia, what are you doing on the floor?” the woman says to another child who looks drowsy and out of it. “She ugly too,” the camerawoman says.

“No ma’am. Eat your food!” the woman yells at the first child as she yanks her by her ponytail.

Police in Lubbock, Texas said they were notified about the video on Thursday and immediately went to the daycare to investigate.

“The Lubbock Police Department was made aware of a video circulating Facebook involving a young child at a daycare in the 3600 block of 50th Street,” the department wrote in a statement (via KAMC News). “Once the video was brought to LPD’s attention, officers responded to the business to investigate. Through the investigation, we were able to determine the incident did not occur today, but rather on a previous date. This case remains under investigation.”

Officials said they were still working to find out the exact date the incident actually occurred.

LaQuitta Wilson, the mother of the 3-year-old girl in the video, told KAMC News she found out about the disturbing incident the same time the public did.

Video footage showing the incident was first posted online Thursday, but multiple parents, including Wilson, said it happened weeks ago. Wilson, who was understandably outraged, said she was never contacted by the daycare.

“She was physically abused by an adult and someone that we paid to place for her safety,” Wilson told the station. “They had no apology. They had no reason. They did not call me. Like I said, everything hit the fan and it’s like they just had nothing to say.”

The daycare center, My Little Playhouse Learning Center, addressed the incident in a statement on Friday and confirmed that the employees involved “were immediately fired” after the owners were alerted to the video.

A daycare employee confirmed that the two employees involved in the video had been terminated, but also noted that one had already been previously fired for another incident and had recently been rehired.

Authorities didn’t identify any of the workers involved, however, social media users uncovered a woman on Facebook by the name of “Kay Kae Rangel” who appears to be one of the fired employees and resembles the woman in the video grabbing the girl by her ponytail.

Rangel said in a post on Facebook that the other worker was the one who posted the video and she was terminated because of a separate incident involving another child.

“The daycare did NOT post it, MacKenzie did and was fired,” Rangel wrote, according to the Atlanta Black Star. “Now [she] wanna post it. She got fired for kicking a kid in the face, which is the owner’s grandson. She is big mad.”

Rangel added: “The lil girl was falling [asleep], putting her whole face in her food. I washed her face, took her chair and she continued, so I was clearly holding her chongo (the Spanish word for bun/hairstyle). That bitch (Mackenzie) just wants attention.” According to KAMC News, a group of concerned parents gathered outside My Little Playhouse Learning Center in response to the disturbing incident.

The child’s grandmother spoke to a news reporter and said she was furious about the whole thing.

“This little girl, she is the sweetest little girl that you could ever know. So, for her to sit there and just pull on her hair, it’s very infuriating,” Shanna Walker said. “I mean, I’m standing here right now, feeling like I’m about to boil over.”

According to the website for the Texas Department of Family and Protective Services, the daycare center has had 19 violations since 2016, ranging from safety violations to lack of employee training to nutrition and food care.

As of Friday (Jan. 18), My Little Playhouse was still open for business.