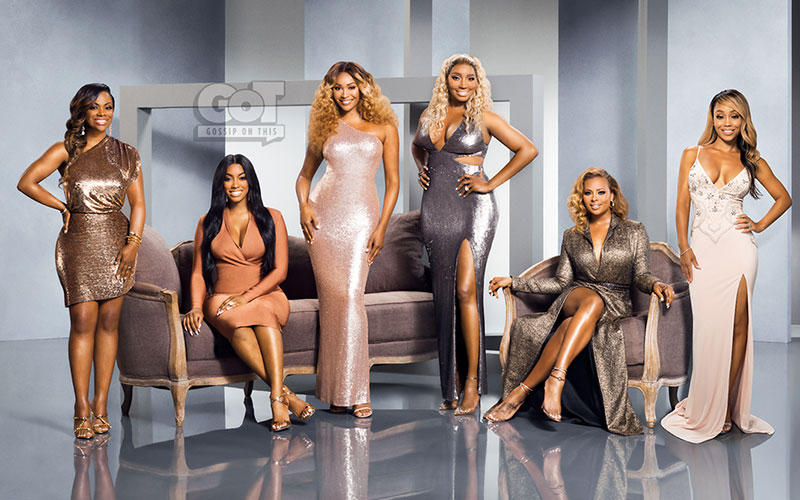 In addition to releasing the Real Housewives of Atlanta Season 11 trailer earlier this week, Bravo also unveiled the official cast photos for the new season.

In the big photo, which features the entire cast, from left to right is Kandi Burruss, Porsha Williams, Cynthia Bailey, NeNe Leakes, Eva Marcille (who’s been upgraded from friend to official peach holder), and Shamari DeVoe—who leapfrogged over longtime “friend of the show” Marlo Hampton to secure her own peach on her very first season. As you can see, two faces are clearly missing from the photo: Kenya Moore and Sheree Whitfield!

As we previously reported, Kenya Moore was let go from the show because she refused to let cameras document her marriage to Marc Daly, and getting pregnant obviously wasn’t enough for her to keep her peach.

We also heard that Sheree Whitfield was fired as well, and it looks like the rumors were true. We’re not entirely sure why Sheree had her peach snatched from her, but we can take a wild guess that it had something to do with her felon bae storyline not being interesting enough to bring in viewers.

Anywho… “RHOA” Season 11 premieres on November 4th. Below, you can check out the individual cast photos and read up on what each lady will be up to in the new season.

Bravo Media is spicing up Sunday nights when “The Real Housewives of Atlanta” returns for an unforgettable eleventh season on Sunday, November 4 at 8pm ET/PT. Favorite Southern sophisticates Cynthia Bailey, Kandi Burruss, NeNe Leakes and Porsha Williams are all back and will be joined by newest housewives Eva Marcille and Shamari DeVoe. Marlo Hampton and Tanya Sam join the season as friends.

Fresh off her stand-up comedy tour, NeNe is busier than ever with the opening of a new location for Swagg Boutique. Business as usual comes to a halt however, as Gregg faces a cancer diagnosis.

Cynthia struggles with the idea of becoming an empty nester, but is excited about the new man in her life.

Kandi decides to launch a risqué burlesque show while she and Todd explore the idea of expanding their family yet again.

Porsha is over-the-moon excited to welcome her first bundle of joy and finally have the family of her dreams.

Meanwhile, Eva and her fiancé Michael welcome a beautiful baby boy and are busy planning a fairytale wedding.

Shamari DeVoe, known from the multi-platinum R&B group Blaque, is new to the mix and is planning to launch new music with her husband Ronnie DeVoe, formerly of New Edition.

Marlo Hampton is back on the scene, joined by newcomer Tanya Sam, a tech savvy business woman who enjoys the finer things in life.