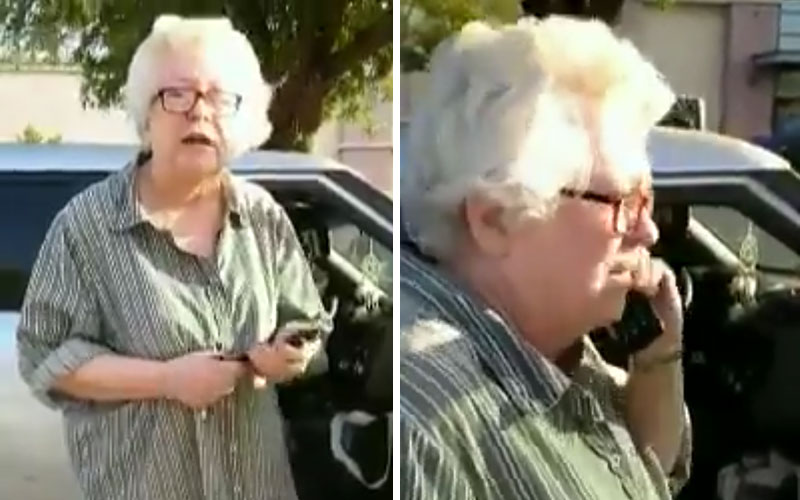 Here we go again: Another white person has called the police on a person of color for simply existing. When will it ever end?

This past weekend, the hashtag #ParkingLotBarbara became a trending topic on Twitter after a video went viral showing a white woman in California calling the police on a mother, who just so happened to be Hispanic, for (GASP!) sitting in her own car with her own baby.

The woman said she was concerned because the child wasn’t properly shielded from the sun’s rays.

The footage starts with the woman admonishing the mother, “Because you told me it was ‘None of your business that your child is in pain,’” as she held a cellphone to her ear.

“She’s not in pain — she’s sleeping in her car seat,” replied the mother. “What are you doing? Tell everyone what you’re doing.”

The woman spoke into the phone, “I have this child here in this car at the PetSmart parking lot and the sun is kind of beating right at the baby’s face in the back seat. She’s still in a little car seat, I don’t know how old she is.”

“In the car with her!” insisted the mother. The woman answered, “No, you’re not, you’re out here yelling at me.”

The mother’s husband then emerged. “She says Elsie is in pain … because she’s sleeping in the sun…” said his partner.

The woman continued her call, “Now she’s outside yelling at me. She wasn’t in the car.” When she spotted the husband, the woman placed the call on hold and the mom exclaimed, “Oh, because he’s white? Because he’s white, it’s OK because he’s here now?”

“Because he’s acting sane — you’re screaming at me,” said the woman, adding that she hadn’t seen an adult present. Then she turned to the mother — who pointed out that she did see her — and scolded her, “One of us at a time.” The woman also told the mom, “It is my business when I mistakenly think the child is in distress.”

The husband then asked the woman to admit her mistake, and she replied, “Yes, I can see that she’s OK now.” She also insisted that she didn’t realize the baby’s father was white, due to his baseball hat and beard.

Twitter, for the most part, called the woman out for being a racist POS and escalating a clearly innocent situation, but there were some far less sane folks arguing that she had good intentions and was simply confused.

I thought that too- until she called the POLICE! After discovering that the mother was in the car with the air conditioning on! Wtf was that for?

This. White women who think the police are at their beck n call are the definition of racist privilege.

I live in Fl. The heat index for most of Sept was 100+. I look in cars in parking lots. More than once have cked on old people sitting in them. I would never call the cops if a child/ senior was not alone and air cond was on. That woman was nuts.

Americas embedded distinction.
Unable to see -demonizing some-unable to see keeps us where we're at. pic.twitter.com/1xvKhmhVUT

1. Okay, don't get mad at me, but if at all possible, I always hung some piece of cloth up so my kids would be shaded from the sun. I don't like the woman's personality either, but if she was concerned about my own child I wouldn't be angry or call her a bitch. Just saying.

#ParkingLotBarbara is the perfect example of how racists think. Black mother sitting in car with child asleep in her carseat. "Barbara" plainly sees black mother in car and calls the police saying baby is in pain. White husband/father comes out and all is fine because he's "sane"

I made a #ParkingLotBarbara post this morning, assuming the Mother was black. I now have 10,000 “save the whites from racism” folks in my mentions saying I’m so quick to call people racists but wrong because she’s Latina. Like suddenly white racists LOVE all Hispanics. ?

Why is it only #WhiteWomen who make these calls?

Children have been dying left in hot cars, two of them on Friday in FL.
That said, a child sitting in air conditioning with a parent is not at all the same thing.
As soon as busybody noticed someone else in the car, she should have just said "have a nice day" and moved along.

The white husband shows up and this lady's attitude completely changes. ffs where do these people come from? #ParkingLotBarbara https://t.co/EIZYDWYqny

Le sigh… Can we all just agree that wypipo calling the po-po on POCs is becoming an old and tired trope at this point?