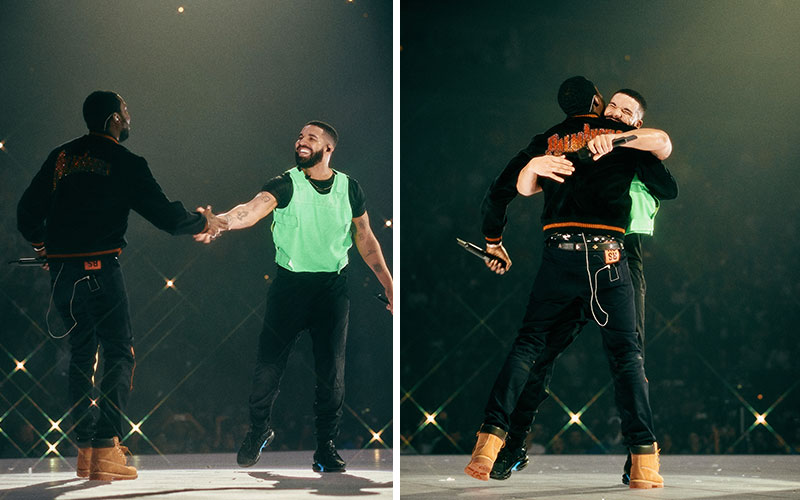 Drake and Meek Mill have been beefing since 2015, with Meek Mill unfortunately on the “wrong” side of the beef. But after appearing onstage together at Drake’s concert in Boston Saturday night (Sep. 9), it looks like the longstanding beef between the two rappers has officially been squashed.

Three years after Drake and Meek Mill launched high-profile diss tracks at one another, the two rappers officially put their feud to rest during the Boston, MA stop of Drake’s “Aubrey and the Three Migos” Tour featuring Migos.

“I wanna say something right now. This right here is a long time coming. This right here is important. This one of my favorite rappers, for real for real,” Drake told the crowd at Boston’s TD Garden after Meek rapped his famous hype hit ‘Dreams & Nightmares.’ “This is my brother, and that’s how it started, and that’s how we’re gonna finish this sh**, for real. Y’all make some noise for Meek Milly from Philly in the f***ing building!”

Drake and Meek’s beef goes back to 2015 when Meek accused Drake of using lyrics from a ghostwriter on a song from his album Dreams Worth More Than Money because Meek was mad that Drake didn’t promote the album.

The feud between the two rappers was definitely among the biggest hip-hop stories of 2015, and inspired Drake’s hit single “Back to Back,” which followed his first not so great diss track “Charged Up.” No one really remembers Meek’s diss tracks.

The beef continued into the end of January 2016 when Drake dropped “Summer Sixteen,” another track going after Meek. The Philly rapper responded with an easily forgotten verse on Fat Joe and Remy Ma’s “All the Way Up” remix.

In 2017, Meek got sentenced to prison for a probation violation and was released in April 2018. In an interview with the Breakfast Club the following May, Meek said that he and Drake had both “moved past” their beef and he appreciated his former foe for backing a campaign for his release from jail.

“He put good energy in the air,” Meek said of Drake’s support at the time. “What happened happened. We moved past that. I think we’ll have a conversation next time we see each other, and get it going.”

Now it looks like all is definitely well between Drake and Meek Mill. The two were seen in multiple photos and videos posted on social media embracing each other.

Drake celebrated his reunion with his old friend on Instagram, writing:

This really gave me peace of mind tonight. Healing and moving forward created one of the most electric and gratifying moments of my career. @meekmill I’m happy that you are home and that we could find our way back to our joint purpose. Cue the Kevin Garnett “anything is possible” adlib).