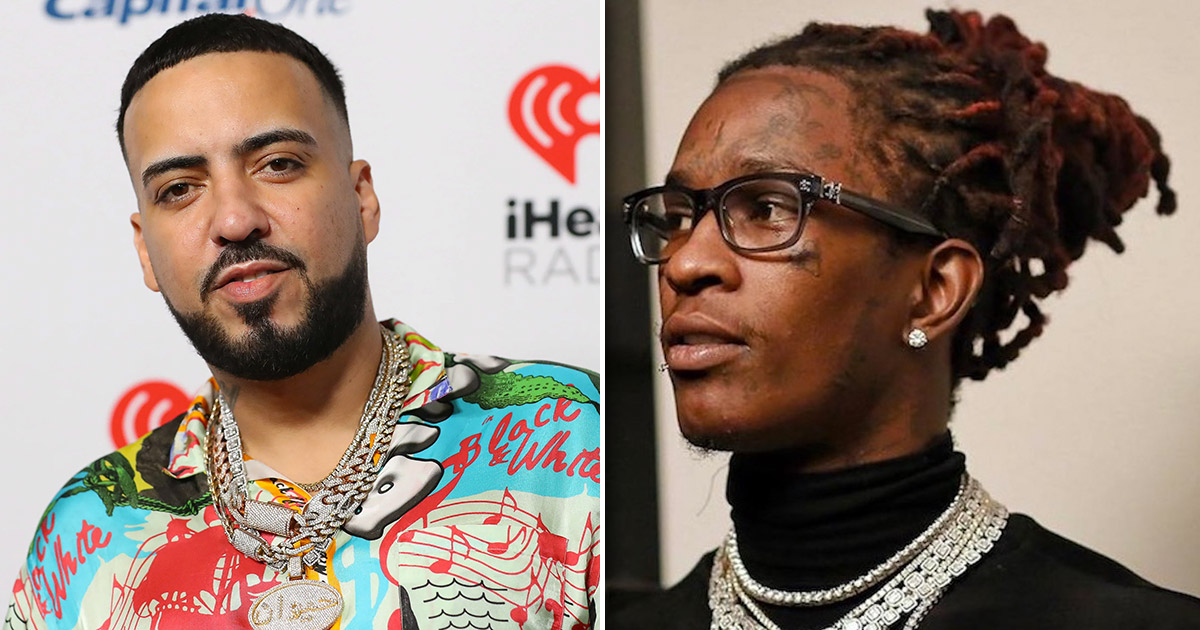 French Montana and Young Thug are going at it on social media, and it’s all because of a comment French made about him having more hits than Kendrick Lamar.

The back-and-forth between the rappers started after French said in an interview with Complex that although Kendrick Lamar has masterpieces when it comes to his body of work, French feels as though he would “outshine” Kendrick at a music festival because he has “more hits.”

“I mean, honestly, you could put somebody like Kendrick Lamar next to me on the same stage at a festival. I might outshine him… not because I’m a better rapper or whatever it is. It’s just that I got more hits,” French said.

“Kendrick Lamar got albums. He got masterpieces. But if you were to put us on the festival stage I would outshine him because I have more hits than Kendrick Lamar.”

After hip-hop fans sounded off on French’s comments on Twitter and started to drag him, the “No Stylist” rapper clarified his statement, saying that he wasn’t saying he’s a better rapper than K.Dot … he just has more “anthems.”

“IF WE JUST TALKING ABOUT ANTHEMS, !! ME VS KENDRICK HIT FOR HIT ! I BELIEVE I CAN GO NECK TO NECK !!” French tweeted.

“I BEEN MAKING HITS FOR A LONG TIME ! IT AINT MY FAULT I BELIEVE IN MYSELF. HOW WAS I SUPPOSED TO ANSWER THAT QUESTION ? HOW MANY TIMES I GOTTA PROVE MYSELF BEFORE I GET MINE…”

IF WE JUST TALKING ABOUT ANTHEMS, !! ME VS KENDRICK HIT FOR HIT ! I BELIEVE I CAN GO NECK TO NECK !! I BEEN MAKING HITS FOR A LONG TIME ! IT AINT MY FAULT I BELIEVE IN MYSELF.
HOW WAS I SUPPOSED TO ANSWER
THAT QUESTION ? HOW MANY TIMES I GOTTA PROVE MYSELF BEFORE I GET MINE ?

He continued: I love kendrick! that’s not just for kendrick that’s to anybody they put in front of me, and ask me that same question … what u want me to say lol ? It should be your attitude too. If u think any less of yourself don’t blame it on the next person who don’t!”

I love kendrick! that’s not just for kendrick that’s to anybody they put in front of me, and ask me that same question ? what u want me to say lol ? It should be your attitude too.
If u think any less of yourself don’t blame it on the next person who don’t ! ? set it up

Apparently that explanation wasn’t good enough for Young Thug, because he let it be known that he still does NOT approve of French Montana’s assertion that he has more hits than Kendrick Lamar.

“Stupid a** n***a say he got more hits than Kendrick Lamar … Fool!” Thugger said of Montana on his Instagram stories, which was re-posted on Twitter.

“HAD TO WEAR THE SKURT TO TUCK THE SCAT LINE UP HAVE CHANGED YOUNG THUG VS FRDNCH MONTANA HITS SINCE YOU WANNA JUMP IN SOME SHIT THAT HAD NOTHING TO DO WITH YOU ! DONT TALK MONEY TO ME MY BOI !! THAT’S REALLY YOU UP THERE,” French wrote in the caption of the since-deleted Instagram post.

French then shared a video on his IG stories thanking Thugger for wearing a skirt in his “No Stylist” video.

“Aye Thug man, thank you for wearing that skirt for me on ‘No Stylist.’ You heard?” French said. “Hold of cap. F**k with you though. But, worry about 21 Savage before me and Kendrick, you heard?”

Lmaoo why French montana violate young thug like this pic.twitter.com/cWqu75PgWD

Thug responded to French, once again, this time saying that he was simply speaking from an artist’s perspective regarding French not having more popular songs than Kendrick.

He continued: “Second of all … I got off the phone with Savage, told him I was coming to Atlanta to f**k with him for a few days. I was supposed to get on a jet today, but I didn’t make it – that’s why he said I’m in the hall of cap. We don’t got no smoke with each other, p***y.

“I don’t even get cool points in my lil n***a hood for talking to suckers like you,” Thug went on. “I don’t even talk to n***as like you bro, stay in your lane I stay in my lane. You ain’t even on my level when it comes to getting no business handled. You a bitch, bro. I’m not going to argue with you or no rap n***a on no internet sh** cause I know that’s what the critics and the white people in this society, that’s what they want.

“That’s what they get a rush off, I don’t even want no problems—nah, I love problems—I don’t want to have no back and forth internet smoke with none of you p***ies. Especially no n***a like you. This sh** come with M’s. You ain’t going to kill nothing or let nothing die. It ain’t that serious. You know what’s up with me bro.”

At one point during Thug and French’s exchange of insults, Thug threatened to call Meek Mill up to get a hold of an alleged video of French getting”knocked out. “I bet Meek find that video! Meek where they knocked his a** out at? Where can I get the video from, Meek?”

Young Thug says he finna call Meek Mill to get an alleged video of French montana getting knocked out ?. pic.twitter.com/J5lnyIZwGv

When it was French’s turn to clap back, he filmed a video lying in the bed shirtless because “that’s how [Thug] like it.” He also questioned the authenticity of the “knockout video” Thug was referring to and offered $1 million for the alleged footage.

“If Meek has some footage of that, tell him to show it to you,” French said. “I got a million dollars if he shows it to you. Does it look like we get beat up? Like a n***a lay hands on me? I been in the game for twenty years. N***as know you going broke.”

French Montana responds to Young Thug. He said if meek mill got the video he’ll give him a million dollars ??? pic.twitter.com/Rs8OdpXsVk

French and Thug’s war of words continued through the night, with French posting a picture of Young Thug posing suggestively and Thug firing back with his own “suggestive” photo of French appearing to hump a man. 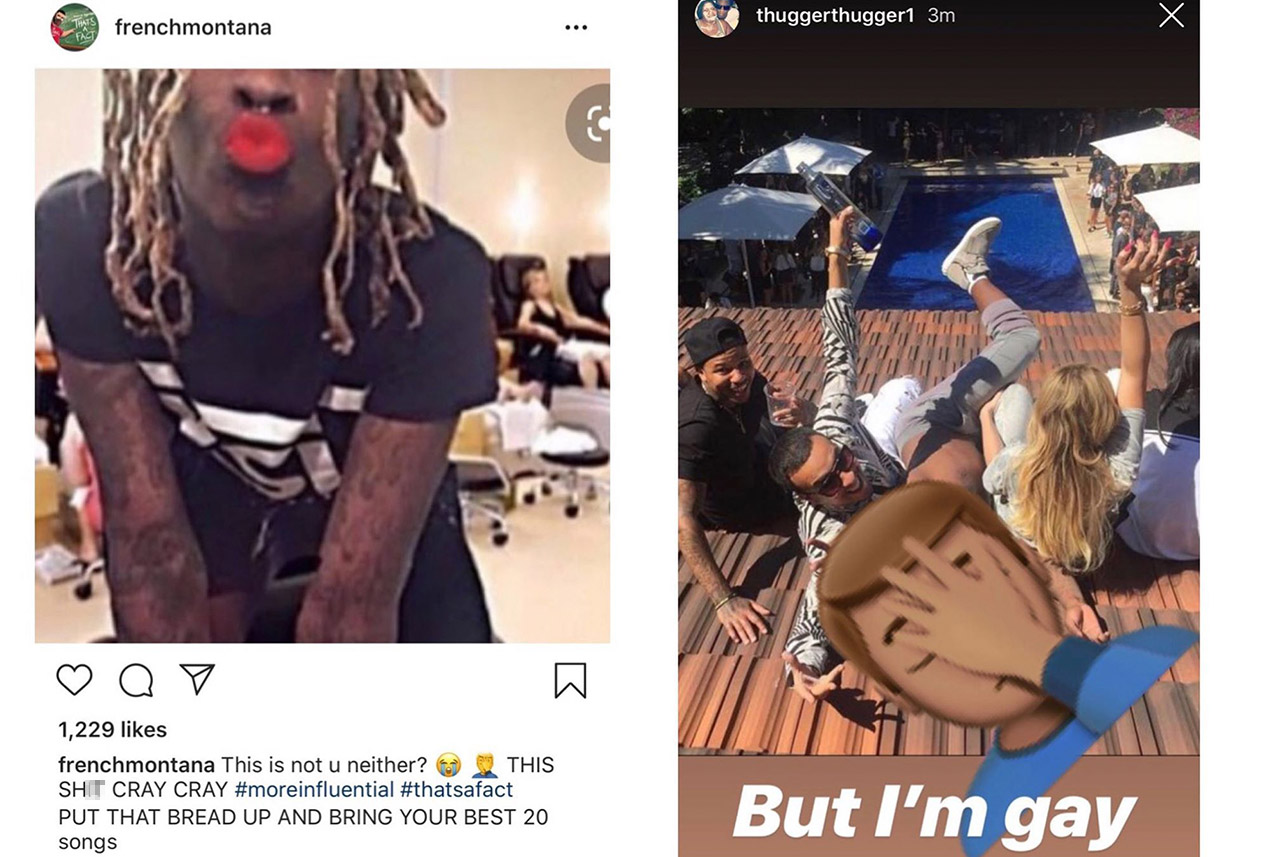 Thug also pulled up to a house French allegedly used to own and recorded a video outside, writing in the caption of the post on Instagram: “This is the house #AuntieFrench owned once upon a time … Dam thought I had something to do tonight.”

Thug also seemed to have the last word in the beef, writing on his IG stories: “I been on your d**k … Imagine being a French Montana fan.”

Thug also got the words “Auntie French” trending on Twitter after he gave that nickname to French Montana because he smokes “more dope than my auntie.”

“I almost forgot that he dropped a song … Y’all make sure you go stream that bullsh** … He need it,” Thug said with a laugh.