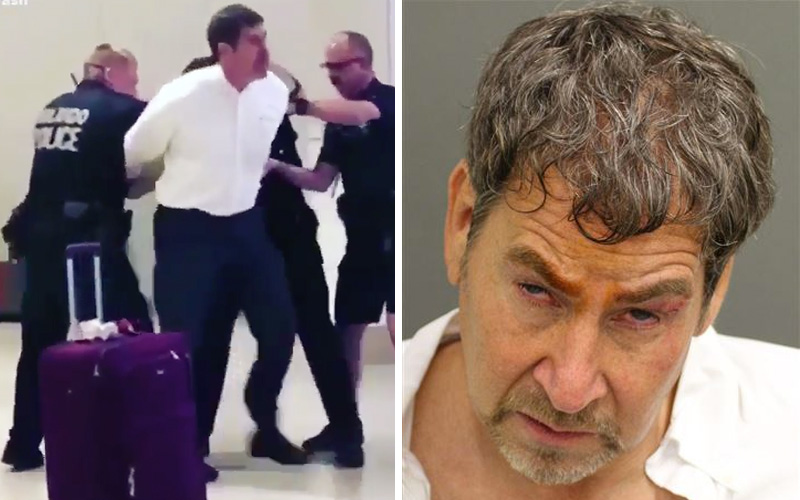 A Florida man was captured on cell phone video last week showing his whole entire A-S-S before being taken into police custody inside a busy airport.

The Orlando Sentinel reports that 59-year-old Jeffrey Epstein—who is a licensed medical doctor in Lakeland, FL—was confronted by police at Orlando International Airport early Thursday (Aug. 16), and when he refused to cooperate, he was thrown to the ground and pepper sprayed.

While police attempted to restrain Epstein, who is white, he could be heard shouting: “You’re treating me like a f***ing black person!”

A bystander recorded the entire incident from the moment police arrived, which you can watch below:

Police responded to a call from OIA airline employees just before 6 a.m. about a disorderly traveler, who was allegedly yelling obscenities while standing in a ticket line.

When Epstein noticed the officers approaching him, he “threw his hands in the air” and yelled that “police had come to arrest him,” his arrest affidavit stated. Police said Epstein refused their orders to leave the airport, and he “continued to yell and say to arrest him.”

Epstein can be heard shouting “do not hurt me, you understand? Do not hurt me” several times in the video as police tried to restrain him. He was eventually taken to the ground and pepper sprayed after refusing to be handcuffed, police said in the affidavit.

Watch this and wait for the punchline. He said, in shock and desperation “You’re treating me like a fucking Black person.”

Think on that for a moment. With all of this going on, that’s what came to his mind. Police brutality, to him, is something reserved for Black folk. pic.twitter.com/3Wp1bzJPSN

After Epstein was taken into custody, he ended up in the hospital after complaining about chest pain. While en route to the hospital, Epstein said he “created a very big disturbance and I did it on purpose,” according to the affidavit. While searching him, police said they found a “baggie” of marijuana on his person.

Once Epstein arrived at the hospital, he refused to speak to a doctor, so he was then taken to the Orange County Jail, police said. He was charged with battery on a law enforcement officer, resisting an officer with violence, trespassing after warning and possession of cannabis of less than 20 grams. He was briefly booked and released on $1,800 bail.

The video made its rounds on social media and was shared on Facebook and retweeted on Twitter thousands of times, with many users expressing outrage that he would shout about being “treated like a black person.” Many users pointed out that if he was really being treated “like a black person,” he would be dead right now.

“If he were really being treated like a black person his name would be followed by a hashtag today!” one Twitter user wrote. “I said the same thing… he wasn’t shot dead and left in the streets,” echoed another.

Another Twitter user wrote: “I won’t go as far as stating the obvious, but if this is [deemed] ‘treating me like a black person’ then please treat us like this. I think I speak for the majority of us when I say we’d prefer this method of treatment over death.”

I won’t go as far as stating the obvious, but if this is deem “ treating me like a black person “ then please treat us like this. I think I speak for the majority of us when I say we’d prefer this method of treatment over death.

“If he were black or brown he would’ve been sprayed [without] warning and I’m not talking about pepper spray either,” said another Twitterer, alluding to the man being “sprayed” with bullets.

If he were black or brown he would’ve been sprayed w/o warning & I’m not talking about pepper spray either..

Epstein spoke with local news station WESH 2 outside the Orange County Jail after he was released and said he created the disturbance on purpose to “prove a point” about police brutality.

“If you’re going to do this to a white doctor, who’s 59-years-old, for doing nothing, then why would black people trust you?” he said. “I’m a conservative Republican, I’m a Trump guy. But until the police fix this problem, I don’t blame black people for being upset when they get arrested.”

Epstein said he was also trying to teach airlines a lesson about customer service.

“I was no danger. I was being loud because I wanted everyone to see,” he said. “I wanted everything to be out in the open. Big companies have to take care of their customers, and when they call the cops in, they got to deescalate, not escalate.”