GOSSIPONTHIS.COM Celebs Beyoncé & JAY-Z Shared Intimate Photos of Them in Bed, and the... 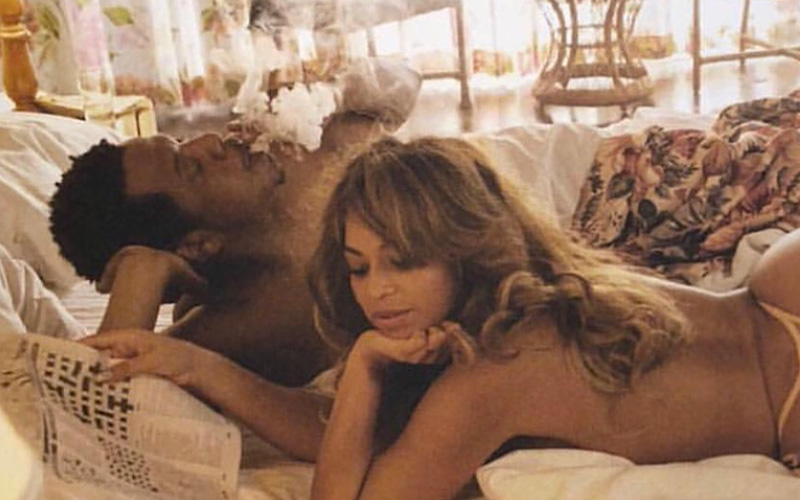 It’s rare that we get a glimpse into the uber-private lives of Beyoncé and JAY-Z, so you’ll have to excuse the Internet for losing it over recently released photos of the couple basically naked in bed together.

Mr. and Mrs. Carter kicked off their “On the Run II” stadium tour in Europe last Wednesday (Jun. 6), which gave the world an inside look at the twins, their vow renewal and some intimate home videos of Bey’s second pregnancy.

Bey and Jay also decided to put their nekkid bodies on display in a tour book featuring some private photos of the two lovers laid up in bed.

In some of the photos, you can clearly see Beyoncé’s “cheeks,” and in the pics of her and JAY-Z, it’s obvious that both were definitely in their birthday suits with only a bed sheet (or cleverly placed arms and legs) to cover them.

…And the internet, unsurprisingly, absolutely could NOT handle it.

Beyonce got yams for days. Help me Lord.

Beyonce in a thong?

What time does the Beyonce challenge start? pic.twitter.com/uk1JyP4yeJ

Beyoncé left you dancing to single ladies, went home and made twins ?

Y’all already know jay Z and Beyoncé picture about to be all over your timeline now like “MOOD” ??????

While some of the comments were generally positive, most of them were focused on how uncomfortable JAY-Z looked, and let’s just say… those were the best/most hilarious reactions:

Hov took a pic with a naked Beyoncè with a “I guess if that’s really what you want to do fine do you boo” look on his face. What is life?

Y’all too ugly to say “I’m good love, enjoy” and to comment on Hov laid up with naked Beyonce, but there’s no NBA games on today so i got nothing to tweet about either.

Too bad JAY-Z already let us know on 4:44 he gives not one damb about what we think about his looks: “Ain’t no such thing as an ugly billionaire. I’m cute.”

Use your energy elsewhere.

Looks like Beyoncé and JAY-Z get the last laugh.