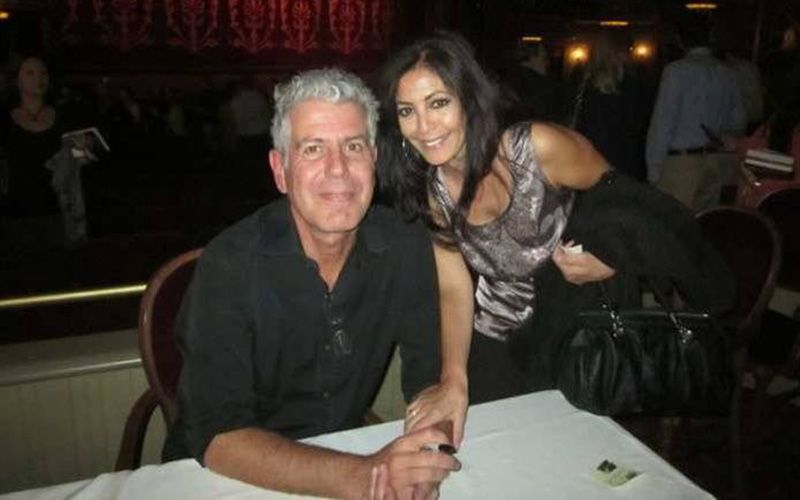 Anthony Bourdain has been married twice, and both of his marriages ended in divorce, which means that he has two ex-wives. His first marriage was to Nancy Putkoski, a woman he wed in 1985. They split 20 years later in 2005.

On June 8th, 2018, CNN reported that Bourdain had taken his own life at his hotel in France, where he was filming his TV show Parts Unknown. According to reports, he hanged himself and his body was discovered by his friend and fellow chef Eric Ripert.

Bourdain and his first wife, Nancy Putkoski, had known each other since long before his fame, and their breakup took a heavy toll on him until he met his second wife, Ottavia Busia, with whom he had a child—a now 11-year-old daughter named Ariane.

Find out more about Nancy Putkoski, her relationship with Bourdain, why they split and how Bourdain dealt with suicidal thoughts back in 2005 after their 20-year marriage ended below.

Anthony Bourdain and Nancy Putkoski were together long before Bourdain became a famous chef, author and TV personality. They were high school sweethearts in New Jersey and later married in 1985.

Bourdain said in a 2012 interview with Daily Life that Putkoski was older than him and she was the “bad girl” in high school. He said in high school, he hung out with the typical crowd, while she was part of the “druggy crowd” and he was “smitten.”

In fact, Bourdain said he chose to graduate high school a year early so that he could follow her to Vassar College in New York. At the time, Vassar had just started admitting men, Bourdain said, so he was one of the only male students at the college when he enrolled. However, he dropped out after two years and enrolled in the Culinary Institute of America in New York.

Bourdain and Putkoski were incredibly close and, at one time, he considered her the love of his life. “She was my partner in crime, my wife, and before that my girlfriend,” he told Daily Life.

Bourdain elaborated on his married life with Putkoski in a 2017 interview with the New Yorker, comparing their marriage to the Gus Van Sant film “Drugstore Cowboy.” Anthony said he and Nancy had a “kind of love and codependency and sense of adventure – we were criminals together. A lot of our life was built around that, and happily so.”

He said much of their life involved drugs, but they also enjoyed a pretty quiet lifestyle, where they would get takeout at night, watch The Simpsons together, and save up for a vacation in the Caribbean every few years.

Putkoski described Bourdain as a “pretty dramatic” person. “It does look pretty bleak in the rearview mirror,” she said. “But, when you’re living it, it’s just your life. You struggle through.”

2Due to Anthony’s extensive travels, he and Nancy divorced after 20 years of marriage, and Anthony became suicidal after the split.

Anthony Bourdain and Nancy Putkoski were very close throughout their marriage. They were so close, in fact, that despite his busy travel schedule, he would often write her long emails.

One time, according to the New Yorker, after passing out after taking medicine for an illness and drinking alcohol on an empty stomach, he woke up emotionally shaken, and he went back to his villa to write a long email to Nancy to help clear his head.

When asked about what he wrote, he told the New Yorker:

“The sort of thing you write if you, you know, thought you were going to die. ‘I’m f**king sorry. I’m sure I’ve acted like I wasn’t.’ We’ve had very little contact—you know, civil, but very, very little. ‘I’m sorry. I know that doesn’t help. It won’t fix it, there’s no making amends. But it’s not like I don’t remember. It’s not like I don’t know what I’ve done.'”

But, ultimately, Anthony’s extensive travel schedule took too much of a toll on their marriage, and they divorced after 20 years.

His marriage to Putkoski was his longest relationship. His marriage with Ottavia Busia, from 2007 to 2016, only lasted 9 years, and they said they split because of how much he had to travel for his career, which was the same reason why he and Putkoski broke up.

Bourdain told Daily Life that, like most couples, he and Putkoski had good times and bad times. “I spent almost two years traveling and filming ‘A Cook’s Tour’ and, as a result, my marriage fell apart,” he said.

He did try to save his first marriage though. According to the New Yorker, he remodeled their apartment, but they still failed to establish a travel schedule to accommodate both parties. He wanted to travel the world and she simply wanted to take a vacation once a year, so, ultimately, they divorced citing distance as the driving force.

After their split, Bourdain said he coped by self-medicating and behaving “in a completely irresponsible and suicidal way.” He said, “I didn’t value my own life and acted accordingly. I had put myself in a very dark place and behaved recklessly in the not-too-subconscious hope that something terrible would happen. I was doing everything possible—smoking pot, drink-driving—to invite that.”

He said divorce was the worst thing in the world for him, even though it was pretty amicable and wasn’t contentious or long and drawn out like some divorces. “It’s just a terrible thing when a relationship that great ends,” he said.

3Bourdain said a trip to Vietnam changed his view about everything in his life, including his marriage to Putkoski.

While Anthony Bourdain didn’t speak too much about why he and Nancy Putkoski divorced right after it happened, he did speak to the Guardian a year later in 2006. He said their marriage fell apart, not because of his success, but after a visit to Vietnam that changed how he looked at everything in his life. He said he had read about Vietnam and it was just like the books and movies, and even better.

“The guileless generosity of strangers, waking up smelling those smells, seeing those sights,” he said. “And having, once, one perfect meal, a confluence of everything good, a source of perfect happiness; I was almost ready to believe in God.”

He continued, “I knew that my whole previous life was doomed. It was no longer going to be normal. I had seen that … color … and I knew that that had changed me, and altered the way I would look at things. And the first time I went back to America … everything was flat. Everything.”

“Everything” included his marriage with Putkoski, which ended shortly after he returned to America. “She was the love of my life. But everything changed,” he said.

4Anthony said Nancy “hated being near a camera” and did NOT like the idea of a TV show.

Though Bourdain didn’t mind being in the spotlight, Putkoski had a serious problem with it. He wrote in his book, A Cook’s Tour, that Putkoski had a “limitless potential for causing mayhem” whenever he had to film. He said he would keep a close eye on her because he was worried about her.

“I was keeping a sharp, worried eye on Nancy, who hated the idea of making a television show, hated being near a camera, and had already taken a serious dislike to the producer for keeping me busy most of the day shooting ‘B-roll,’ meaning scenery, shots of me walking around and pretending I was thinking deep thoughts, while she stewed, neglected, in a hotel room,” he wrote.

While Anthony desperately wanted the world that was opening up to him, Nancy felt like Hollywood fame was like a cancer to their lives and their relationship, and she didn’t really want to be on camera. In fact, Bourdain once said that Putkoski “identified television early on as an existential threat to the marriage,” the New Yorker reported.

“She told me recently that her ideal degree of fame would be that of a Supreme Court Justice,” he said. “Almost nobody knows what you look like, but you always get the reservation you want.”

5Anthony Bourdain and Nancy Putkoski never had children, and he once said he didn’t want any because he didn’t think he would be a good parent.

Even though their marriage spanned two decades, Anthony and Nancy never had any children together.

Bourdain only had one child, Ariane, with his second wife, Ottavia Busia. But before he had his daughter, Bourdain said he wasn’t interested in having any kids. In his 2006 interview with the Guardian after his divorce from Putkoski, Bourdain said he didn’t regret not having any children at the time. Why? Because he thought he would have been a terrible parent.

“I’m a very good uncle,” he said. “The evil uncle who lets them do everything. But a parent? Up until very recently I could hardly take care of myself.”

Coincidentally, Bourdain would go on to meet his Ottavia Busia, his second wife, a year later, and they had a child together. After his daughter’s birth in 2007, his views about having children made a complete 180. He told Daily Life at the time, “It’s cliche to say that being a father is the greatest thing ever, but there’s only one thing better and that’s being a father of a little girl.”