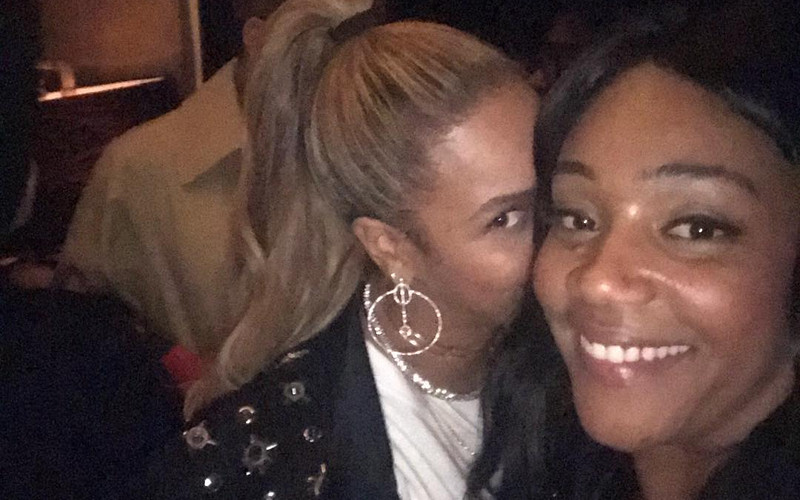 She done did it again! Despite Beyoncé calling out Tiffany Haddish for sharing private details of their first meeting, Haddish is spilling even more tea from that bizarre star-studded party in December.

In the April issue of GQ, Haddish shares the almost-unbelievable story that led to her selfie with Beyoncé. She claims the same unnamed actress that tried to flirt with Jay-Z also bit Bey in the face!

As Haddish tells it, the actress was already “doing the most-est” and this is what happened:

“So Beyoncé stormed away, went up to Jay-Z, and was like, ‘Jay! Come here! This bitch—’ and snatched him. They went to the back of the room. I was like, ‘What just happened?’ And Beyoncé’s friend walked up and was like, ‘Can you believe this bitch just bit Beyoncé?’”

“A lot of things happened” from there on, Haddish continues. She says she had a few run-ins with the actress throughout the night, culminating in a brief stand-off after the woman told the carefree comedienne to stop dancing.

“I’m going to beat somebody ass at your party,” Haddish told Beyoncé. “I just want to let you know that.” Beyoncé told Haddish to just “have fun” and calmed her down by agreeing to take the selfie.

But later that night, Haddish just had to know what really went down between Beyoncé and the actress “doing the most-est.” The woman was high according to Bey.

A rep for Beyoncé could not confirm Haddish’s version of events to GQ. “I absolutely cannot comment on any of this, as I have no knowledge.”

The Girls Trip star’s Beyoncé story had Twitter adding more outlandish details, turning Haddish into a meme, and some even worried for her safety for once again spilling Beyoncé’s tea after already being warned.

Tiffany Haddish pretending to listen to your explicit instructions not to repeat any of what just happened at the party to a reporter: pic.twitter.com/CuboU0WS24

Tiffany Haddish about to end up in a ditch if she keep spilling Beyoncé tea, ANYWAY, so WHO bit Beyoncé in the face??? pic.twitter.com/1RHJ1qzKFk

I wish Tiffany Haddish was on that elevator 4 years ago. I still have questions. pic.twitter.com/XnfXVqZmqu

Beyoncé the next time she bumps into Tiffany Haddish at an event: pic.twitter.com/ecFyncZUeN

Many believe Beyoncé called out Haddish in her verse on DJ Khaled’s “Top Off” for claiming in an interview that she saw Beyoncé stop a woman from flirting with Jay-Z during the December party.

“If they’re tryna party with the queen. They gon’ have to sign a non-disclosure, ayy,” Beyonce says in the song while “Tiffany!” can be faintly heard in the background vocals.

“I Love Beyonce part! Everything she said rang so real to me,” Haddish tweeted after the song dropped. “Just know I will sign A NDA any day For Beyoncé.”

I Love Beyonce part! Everything she said rang so real to me. Just know I will sign A NDA any day For Beyoncé. DJ Khaled – Top Off (Ft. JAY Z, Future & Beyonce) https://t.co/9Ing2kNq14 via @YouTube

Just to note, some have pointed out that Tiffany Haddish’s GQ interview was possibly conducted before “Top Off” was released.