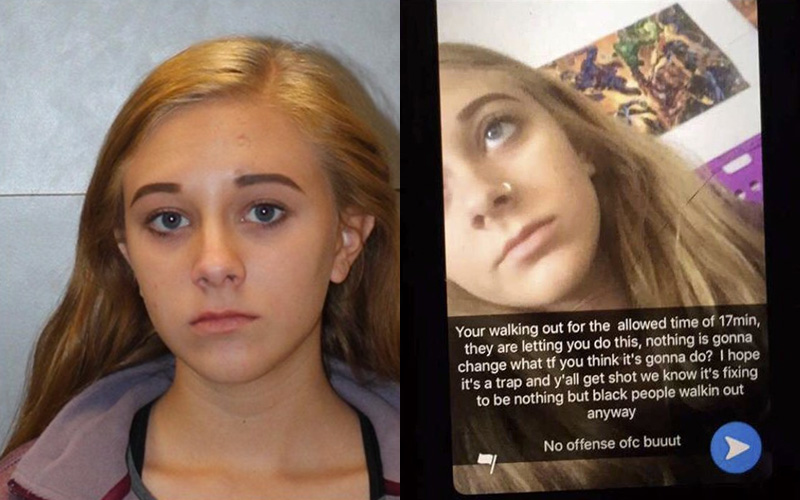 Morgan Roof was arrested Wednesday (Mar. 14) at A.C. Flora High School in Columbia, South Carolina after she was found with pepper spray, a knife, and marijuana on school grounds. She also posted a Snapchat saying that she hoped the students who were participating in National Walkout Day would “get shot.”

On Wednesday, thousands of students across the country walked out of class to demand stricter gun laws in honor of the 17 students and faculty members killed at Marjory Stoneman Douglas High School in Parkland, Florida last month.

Roof said in her Snapchat post that she figured most of the participants would be black.

“Your walking out for the allowed time of 17min, they are letting you do this, nothing is gonna change what tf you think it’s gonna do? I hope it’s a trap and y’all get shot we know it’s fixing to be nothing but black people walkin out anyway. No offense ofc buuut”

This is Morgan Roof, Dylann Roofs little sister, her snapchats there and all do your thang twitter pic.twitter.com/MttSF875is

According to Lieutenant Curtis Wilson, a spokesman for the Richland County Sheriff’s Department, Morgan claimed to have brought the weapons to school for protection.

She was taken to the Alvin S. Glenn Detention Center and charged with simple possession of marijuana and two counts of carrying weapons on school grounds. Her bond was set at $5,000.

“As many of you know, today was set as a time for a student walkout. Our student leaders had asked to be allowed to spend seventeen minutes to remember each of the victims of the Parkland, Florida school shooting. This student-led event was voluntary. The walkout went well with only a minor verbal disagreement that occurred at dismissal from the event.

“A rumor then started that a certain student had a weapon. This was heavily investigated and found to be inaccurate. In a separate situation, a student used social media to post a hateful message. The posting was not a threat, but was extremely inappropriate. That student was dealt with in a swift and severe manner as the posting caused quite a disruption.”

In June of 2015, Morgan’s brother Dylan Roof shot and killed nine black churchgoers during a Bible study at Emanuel AME Church in Charleston. He was sentenced to the death penalty last year.