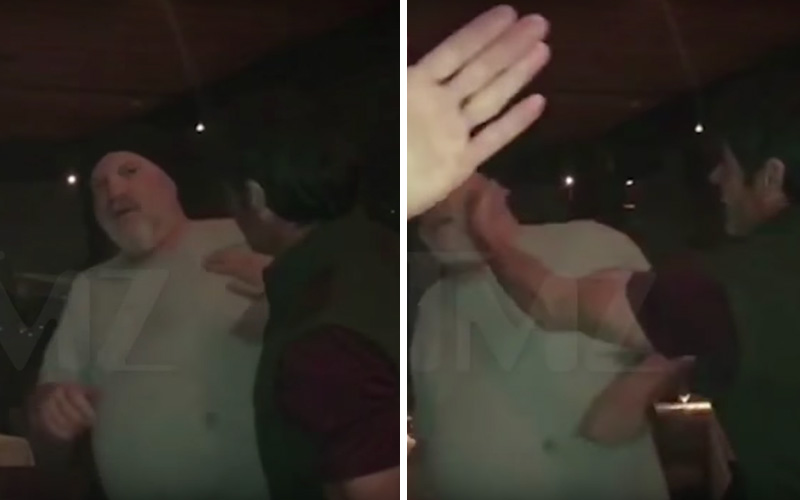 Someone decided to play “patty cake” on Harvey Weinstein’s face … and a bystander caught the whole thing on video so that we can all point and laugh together!

According to TMZ, Weinstein was dining with his sober coach at Elements restaurant at the Sanctuary Camelback Mountain resort in Scottsdale Arizona when two men sat at a table adjacent to his.

One of the men, identified simply as “Steve,” walked up to Weinstein and told him he loved his movies and wanted to take a picture with him. Steve said Weinstein became “belligerent” and told him to “buzz off,” TMZ reported.

The restaurant’s manager, however, said Weinstein wasn’t belligerent, he was actually “very sweet about it,” she said, and he (allegedly) told the guy “I’d rather not take a picture right now.” The manager said the two shook hands and Weinstein went back to stuffing his fat, disgusting face. But, whatevs, that’s NOT the point of this article.

Around 9 p.m., as Weinstein and his sober coach prepared to leave the restaurant, it just so happened Steve and his friend were on their way out as well, and Steve used that opportunity to do something for the culture. Steve, who told TMZ that he had “quite a bit to drink,” told his friend to pull out his cell phone and record what was about to happen.

Initial reports stated that Steve tried to “punch” Weinstein, but neither of the blows landed. However, video footage later shared by TMZ tells a totally different story. The clip shows Steve giving a messy-looking Weinstein two quick back-handed slaps to the face, and the hits were apparently hard enough to make the Hollywood rapist—who appeared to be drunk as well—stumble a bit.

“Get the f**k out of here, you’re a piece of s**t. F**king with those women… Get your f**king ass out of here,” Steve can be heard in the video telling Weinstein, as the disgraced film producer’s sober coach tries to put his hand in front of the camera to get the cameraman to stop filming the incident.

Reps for Weinstein told Page Six that Weinstein “is still OK and in good spirits” and that no police report was filed. “Looks like the guy just patty-caked him twice,” a rep said.

TMZ reported that the man behind the camera asked Weinstein if he wanted to call the police, but Weinstein declined and everyone went their separate ways.

Weinstein has been living in Arizona at a rehab facility following accusations from nearly 100 women that he sexually harassed/assaulted them. Among the accusers were actresses Ashley Judd, Salma Hayek, Lupita Nyong’o and Gwyneth Paltrow. Despite the MASSIVE number of accusations, Weinstein has repeatedly denied the claims through a rep, saying, “Any allegations of nonconsensual sex are unequivocally denied by Mr. Weinstein.”

Contrary to rumors that Weinstein was in Los Angeles during the Golden Globes last week, Weinstein’s reps confirmed he was NOT in Hollywood, and was in Arizona the whole time.