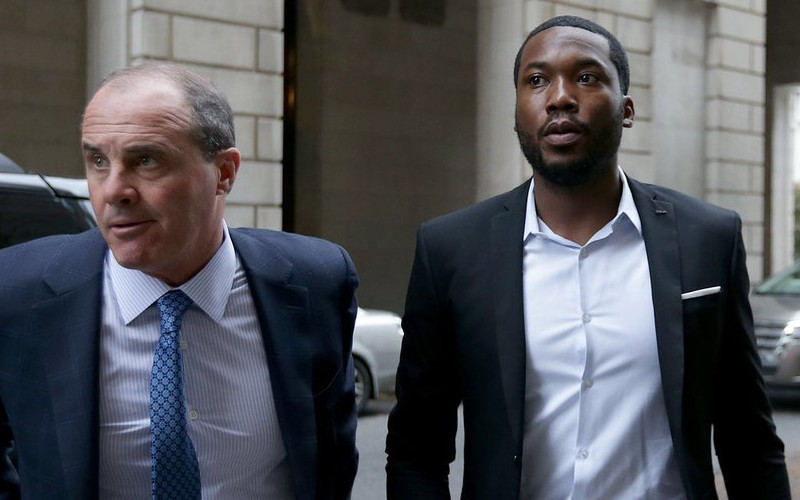 Meek Mill’s (semi) luck with the law has run out. After having two separate charges dropped earlier this year, the rapper was just sentenced to 2-4 years in jail for violating the terms of his probation.

Meek attended a probation violation hearing at the Criminal Justice Center in Philadelphia on Monday (Nov. 6). Due to two arrests earlier this year, the judged ruled Meek had, in fact, violated his probation and sentenced him up to four years behind bars, with a minimum of two years.

The incidents the judge used to make their ruling occurred in March and August of this year. In March, Meek was charged with misdemeanor assault after an altercation with two employees at a St. Louis airport.

Meek was then charged with reckless endangerment in August in for illegally riding his dirt bike in Manhattan while filming a music video.

Charges from both incidents were eventually dismissed, but that didn’t stop the judge from sending him to prison. It’s the multiple arrests themselves that were considered probation violations.

Meek’s probation stems from a 2008 drugs and weapons conviction, which he served eight months in prison for. He was originally placed on five years parole after his release, however, he was given six additional years in 2016 after violating his parole agreement.

Twitter reacted to Meek’s surprising jail sentence, making him the No. 1 trending topic.

Meek getting put away for cases he beat already… that's wild pic.twitter.com/DuYuQcPmFo

Meek Mill when he found out that he gotta go back to jail for another 2-4 years… pic.twitter.com/aavbM8PavI

“Damn Meek how you holding up in there ? “ pic.twitter.com/RVZO2yDYSw

The sentence given to Meek is just plain ridiculous and excessive. 2 to 4 yrs. for riding a dirt bike. pic.twitter.com/95mizSxFci

That shit so fuckin weak bro !!! Meek still doing time for some shit he did 10 years ago …. the system is set up to keep us down smh!!!