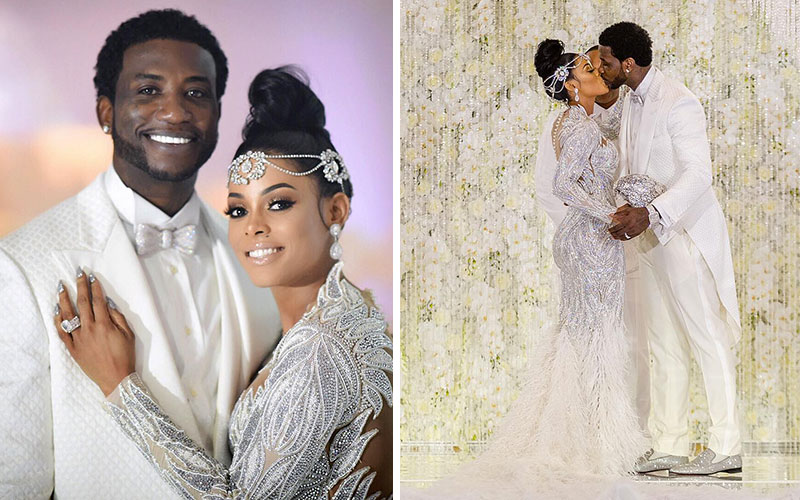 Gucci Mane and Keyshia Ka’oir are officially husband and wife after tying the knot in an all-white everything wedding that was broadcast “live” on BET.

Gucci and Keyshia made their relationship official in front of friends and family (and TV cameras) Tuesday night (Oct. 17) at the Four Seasons hotel in Miami, Florida. (FYI: Gucci has a strong affinity to the numbers “1017” because of his record label of the same name, and, ironically, he was released from prison 17 months ago.)

Though the nuptials were technically advertised as a “live event,” the event was apparently pre-recorded, according to a number of credible media reports published hours before the special aired on TV.

BET reportedly paid the couple nearly $2 million for the exclusive rights to their big day and to document the days/weeks leading up to it for a 10-episode reality show called “Gucci Mane and Keyshia Ka’oir: The Mane Event.”

According to TMZ, Gucci and Keyshia scored a $650K contract with BET and the network cashed out around $1 million to cover the cost of the extravagant wedding for a grand total of about $1.7 million.

The groom rocked an all-white tux with silver sparkly loafers and a matching diamond bowtie while the bride wore an expensive handmade long-sleeve gown embroidered with hundreds of thousands of tiny crystals and a matching diamond headpiece. And Keyshia’s “bouquet” didn’t even contain a single flower—it was actually an arrangement of a bunch of crystals designed in a floral pattern.

Mr. and Mrs. Guwop set the tone for their wedding the night before with their rehearsal dinner, which saw them dressed in matching all-red outfits. Gucci also surprised his new wife with brand new his-and-hers 2017 Rolls Royces.

Gucci and Keyshia first met back in 2010 when Guwop was in jail and got engaged last November when the rapper popped the question at an Atlanta Hawks game with a 25 karat ring reportedly worth over $2 million.

Check out a bunch of photos (and some video footage) from Gucci Mane and Keyshia Ka’oir’s star-studded “Mane Event” wedding below: