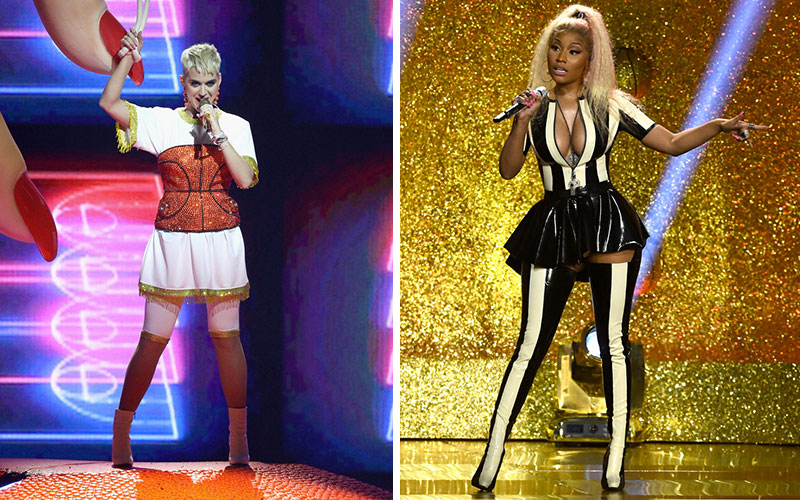 Now that MTV has thoroughly run its most valued live performance vehicle into the ground, the network has decided to save on the money it usually spends on landing a good host and instead opted to have one of its musical performers take the reigns.

Katy Perry, who’s had a very so-so year musicwise with the release of her new album Witness, was blessed with the MC job. But unfortunately, somewhere during the Witness promo tour, Katy lost a lot of her nerve and has opted to hide completely behind her sweet and naive persona.

Which is fine, if that’s what she wants to do, but strangely, she’s proceeding with the release and promotion of her Taylor Swift clapback track, “Swish Swish.”

The initial performance of the song on SNL featured Katy smugly snarling and throwing literal receipts at the camera, taunting Swift essentially. But now, Katy has had a come-to-Jesus experience and is sticking to the literal meaning of “Swish Swish” by wrapping it up in a basketball-themed goof session at the VMAs.

Nicki Minaj, who is clearly just happy to cash a check and score some air time, still shows up but for some weird reason, her interactions with Katy are distant and the two don’t lock arms or interact much on stage together in any meaningful way. Perhaps this is because Nicki is disgusted that Katy has wussed out in her war against Taylor? Who knows.

Watch Katy Perry and Nicki Minaj attempt to pull off a “slam dunk” at the VMAs below: