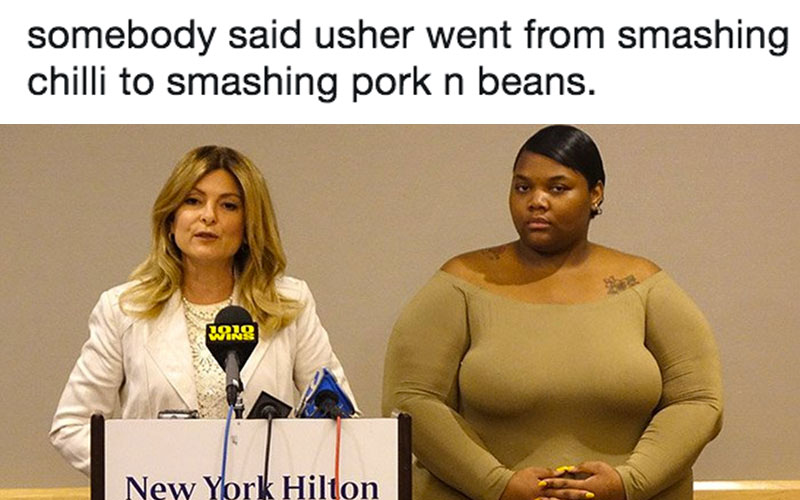 Quantasia Sharpton is one of the latest people to sue Usher in the singer’s growing herpes scandal. Along with her lawyer, Lisa Bloom, Sharpton shared details of her sexual encounter with Usher during a press conference in New York on Monday (Aug. 7).

Sharpton says she attended an Usher concert for her 19th birthday and was invited backstage because of her birthday crown. A security guard then told her Usher was interested in her and asked for her number. After the show, she claims Usher called her from a blocked number and then asked if he could come to her hotel room.

“We spoke for a while and then we engaged in sexual contact. He never warned me about any STDs,” Sharpton claimed.

But here’s the gag: The 21-year-old says she DOES NOT have herpes. Sharpton is suing Usher because she feels her rights were violated as he knowingly put her health at risk without her consent.

Twitter responded to Quantasia Sharpton’s press conference and admitting she doesn’t even have herpes with a major side eye. Many believe she is lying, while others joked about everything from her looks to her name.

yall not finna sit here & tell ME that out of allllll the groupies , Usher picked HER . YALL NOT ? pic.twitter.com/JIJJwC91MP

I was expecting a fine dime breezy to be suing Usher .. not this house ? pic.twitter.com/62KvkUatrR

Me enjoying/believing all the Usher slander Vs. When I seen his accuser: pic.twitter.com/WgPZb0FUPo

i hate fat shaming but y'all… pic.twitter.com/Fb5VVTQl3f

Lisa Bloom SET THAT GIRL UP!!! The memes are gonna be EPIC! She should have just stayed out the public eye! Oh baby girl! You're done here!?

How you gone sue Usher for herpes if you don't have it… Its too damn early for these shenanigans. pic.twitter.com/nnC88mNspt

Y'all believe Usher fucked a dude but not a fat chick? Interesting.

I refuse to believe Usher fucked this ???? pic.twitter.com/wDE9MWiCaj

I'll believe Usher gay before I believe he fucked that girl ????

When everybody saw the woman who is suing Usher for supposedly giving her herpes. pic.twitter.com/ZAz6zu63kJ

All the baddies that would attend an usher concert and u mean to tell me he picked that….??

Lisa Bloom ain't shit. If that lady was my client, I would've been like just write a statement and I'll read it.

she says Usher's guard asked her for da number, he called from a BLOCKED number & only asked for her hotel info.Thats what STDs are made of

Lay my burdens down, Jesus.

We will believe her if she said usher gave her diabetes pic.twitter.com/QHwv2qETOr

This Is Who ALL that hype was for.?? She sure it was Usher and not AN usher ??? somethin don't add up ? pic.twitter.com/PjlIu1ZCgm

Some people were not here for the fat-shaming, though.

People are so mean and hypocritical. Just because that woman is hefty doesn't mean Usher didn't smash.

Why couldn't Usher have fucked Quantasia? Because she's fat? Fat bitches get fucked everyday, so stop it

Y'all believe Usher fucked a dude but not a fat chick? Interesting.

All these people not believing this woman slept with Usher because she's fat got me like…#FatShaming pic.twitter.com/xhjXosna5R

Along with Quantasia Sharpton, Lisa Bloom is representing two other people (one woman and one man) who claim they also had sexual contact with Usher and he failed to inform them of any STDs. They have chosen to remain anonymous and Bloom says at least one of them have tested positive for herpes.