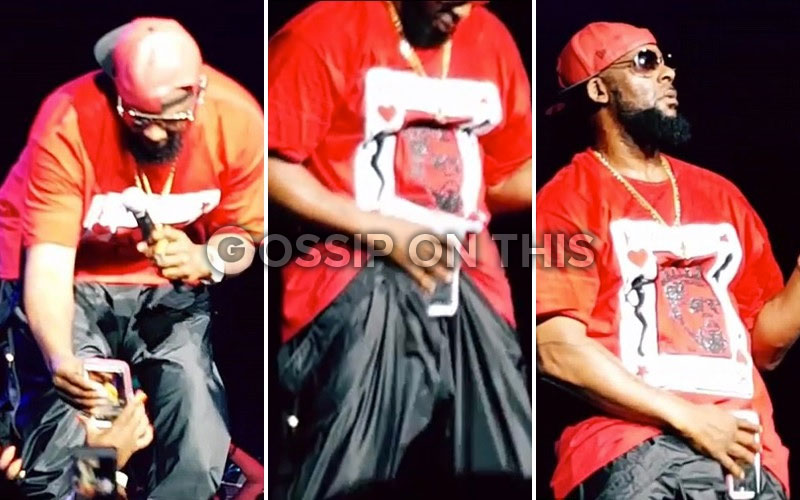 In case you haven’t gotten the memo, R. Kelly is truly disgusting. The perv took the stage for the first time since being accused of holding several young women hostage in a sex cult. But the scandal didn’t stop Kelly from bumpin’ and grindin’ on stage.

R. Kelly performed in Virginia Beach on Friday night (Jul 28.) and got touchy-feely with female fans on the front row. He encouraged them to touch and rub on him as he performed. Kelly upped the raunch level when he grabbed one fan’s phone and then rubbed it all over his sweaty crotch.

The fans in the audience—who clearly don’t mind the sex cult allegations—loved every moment of Kelly’s sexual assault on an inanimate object. Meanwhile, I’m over here like:

This isn’t the first time R. Kelly has done something so explicit and graphic on stage. On several occasions, he has let fans grab his crotch and wipe sweat off his body (and crotch area). He then surprises them by suddenly thrusting his crotch in their face while they’re touching him.

Kelly reportedly began his Virginia Beach concert an hour and a half late and only performed for 45 minutes. However, he was sure to shout out the women who attended and plugged his upcoming Baltimore show. He seems excited to scope out his next hostage, I mean, ingénue.

Last night in Virginia Beach the ladies were in the building…can't wait to see you all tonight in ?BALTIMORE? for #TheAfterPartyTour pic.twitter.com/5v6XkXWepE

Prior to the Virginia gig, R. Kelly denied allegations from a BuzzFeed News report that claimed he is holding several young women against their will on two of her properties, controlling every aspect of their lives, and using them for sex.

He said in a very creepy video:

“I just wanna let all of my fans out there know that despite all of the crap y’all hearing, I will be coming to the East Coast to do my show. And, believe me, y’all, it’s a bunch of crap. All right?”