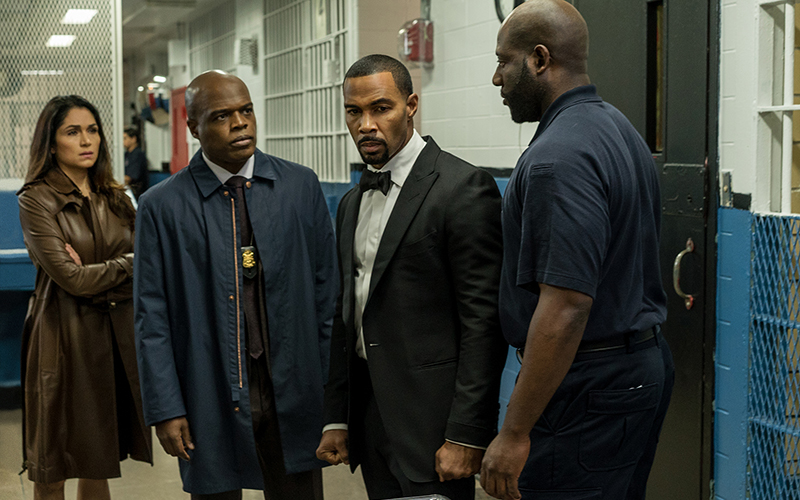 Way back in the first season of Power, when we were first introduced to the “big rich town” and its colorful cast of characters, James St. Patrick aka “Ghost” was trying to be the “biggest goddamn drug dealer in New York City.”

By the time Season 3 rolled along, Ghost no longer wanted to be Ghost. He spent the entire season trying to erase his drug kingpin persona in favor of his business/family man image. His only problem was that no matter how much he tried to be the good guy, his past would always come back to haunt him, forcing him back into his old patterns.

Ghost is a perfect, living, breathing example of “wearing too many hats” or “spreading yourself too thin.” With him juggling so many different personalities, he was bound to end up where he is now, which is a helluva rut.

Season 4 of Power picks up literally where Season 3 left off. Ghost has been arrested for the murder of FBI agent Greg Knox, which is ironic, considering he had nothing to do with Knox’s death. Yes, Ghost has killed several people in the past, but only in his world would he be accused of a murder he didn’t commit, thanks to a nosy, ill-informed girlfriend.

PREVIOUSLY: Power Season 3 Finale Recap — What Is Ghost Gonna Do Now That Everything Has Gone to Hell?

As we all know from the Season 3 finale, Knox was killed by fellow cop Miguel Sandoval (aka “Mike”) for knowing too much, but no one in the world of Power is aware of this, except for Mike of course. The murder is pinned on Ghost (to Mike’s relief) all because he chose to be in the wrong place at the wrong time. Thanks to a careless slip-up, his fingerprints were discovered at the scene of the crime (Greg’s apartment) and Angela is convinced that her former flame is a murderer and Ghost would be crazy to think he can convince her otherwise.

Ghost is locked up, and they won’t let him out. In the opening scenes of Episode 401, “When I Get Out,” as Ghost is being processed, his memory flashbacks to the times when his wife (Tasha) and his best friend (Tommy) tried to warn him about his side chick (Angela), but he just wouldn’t listen. I would bet real money that Ghost wishes he would have listened to them, but it’s too late for that now. He’s in jail for allegedly murdering a federal agent, and it honestly doesn’t look like he’ll be seeing freedom anytime soon. The fact that Ghost is in jail for being an alleged cop killer makes him an easy target for the guards, especially one in particular named “Williams” (played by the late Charlie Murphy), who makes it clear early on that he’s going to be a problem.

Meanwhile, Tasha is back at home frantically trying to contact her husband to let him know about the ransom text she got about Tariq, but the prison guards won’t let him answer. When he points out that it could be an emergency, Angela quips, “We can send an NYPD cruiser by your place if you’d like,” and Ghost gives her one of those “if looks could kill” stares.

As this is happening, we see Sandoval about to dispose of the murder weapon, but he gets a phonecall informing him that Ghost has been arrested for Greg’s murder, so he decides to hold onto the gun. This guy is pretty shady, so I wouldn’t be surprised if he tries to plant it on someone. Besides, it will be pretty difficult for them to prosecute Ghost without a murder weapon.

While Ghost is in police custody, Angela tries to act like she’s enjoying seeing him helpless, but you can tell she still has feelings for this man. In fact, when she gets back to her apartment, she’s looking all sad and distraught and dramatically drops her wine on the floor. Girl, bye! You’re the one who put him in jail in the first place. You don’t even have a right to be sad.

Later, Ghost uses his only phone call to talk to his lawyer, Joe Proctor, who advises him to “keep your mouth and your sphincter shut.” Proctor, who has his own problems back home (his baby mama is a psychopathic drug addict), urges Ghost to be strong and he promises him that he’ll have him out of jail ASAP. Proctor then calls Tasha to loop her in on everything that happened.

Later, when Proctor goes to the jail, Ghost maintains his innocence, but the lawyer points out that they have DNA evidence and fingerprints against him. Ghost admits to being in the apartment to get the recording that could have exposed him and Tommy’s drug operation. “You told me I needed to get that recording,” Ghost says. “Yeah, I didn’t tell you to break into an FBI agent’s apartment to get it,” Proctor responds. “And I didn’t tell you to kill him!” Proctor clearly isn’t convinced that Ghost is as innocent as he claims.

“I need my kids to know I didn’t do this,” Ghost asserts, but Proctor says their first priority is getting him out on bail. Until then, Proctor advises Ghost to act like “legit club owner James St. Patrick and you wouldn’t know what to do with a gun if it fell in your lap.”

Prior to Ghost’s bail hearing, Angela runs into Proctor, who basically tells her that he knows exactly what she’s up to. “You know he didn’t do this. You’re just angry because he left you to go back with his wife,” he tells her. “This is revenge. You’re trying to ruin his life,” which, SHE IS!

Angela thinks this is “her case,” but because she f**ked not only the victim, but also the murder suspect, she’s informed by the new DA, John Mak (played by Sung Kang of the Fast & Furious franchise), that she’ll only be able to spectate.

At the hearing, Ghost pleads not guilty, and the judge seems like she’s leaning in Ghost’s favor, but ultimately denies bail until his trial. “You can’t think I did this,” Ghost says to Angela on his way out of the courtroom. “You’re right, Jamie. I know you did it,” she replies. (Insert obligatory eye roll here)

Back at the jail, Williams (Charlie Murphy) continues to antagonize Ghost, accusing him of “resisting.” He and another guard take Ghost to a secluded area and beat the crap out of him with their billy clubs. It looks like Ghost, the accused “cop killer,” is going to have a rough time in prison.