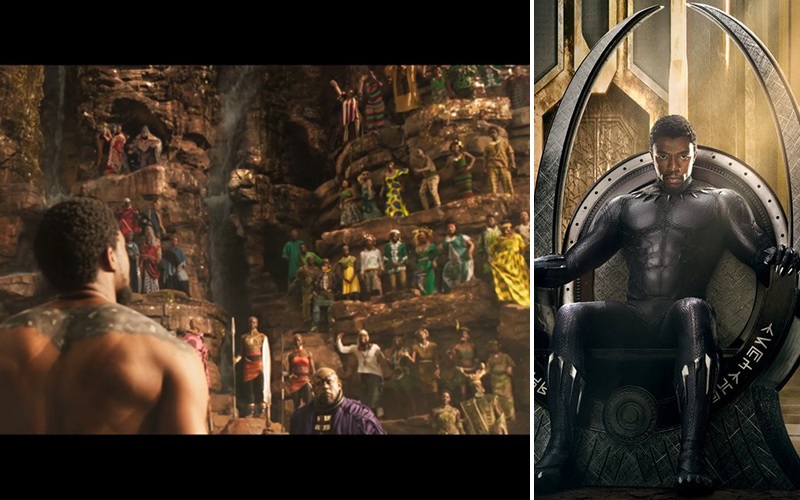 The two-minute trailer, which aired during Game 4 of the 2017 NBA Finals Friday night (Jun. 9), gives us a glimpse of Wakanda and its newly crowned king, T’Challa a.k.a. Black Panther (Chadwick Boseman).

Though the trailer doesn’t offer any plot details, it does suggest T’Challa will be tested as the fictional African nation’s new leader. In a voiceover, elder Wakandan statesmen Zuri (Forest Whitaker) tells T’Challa:

“The world is changing. Soon there will only be the conquered and the conquerors. You are a good man with a good heart, and it’s hard for a good man to be a king.”

When Michael B Jordan looks so menacing you don't realize the star of one of the biggest movies of 2017 is right beside him. pic.twitter.com/7JKDl6VRtL

We’re also treated to glimpses of Erik Killmonger (Michael B. Jordan), an exile who attempts to dethrone T’Challa, and Lupita Nyong’o, who plays Black Panther’s love interest and is a member of the Dora Milaje, the king’s all-female personal bodyguards. And if you blink, you might miss Angela Bassett, Black Panther’s mother.

Looking at Angela Bassett with those white dreads makes me think of what we could have had if she was Storm. #BlackPanther pic.twitter.com/n1aESxwvz0

The trailer was preceded by the release of the first official poster.

Check out the new @MarvelStudios #BlackPanther poster & watch game 4 tonight for the premiere of the teaser trailer! Witness the legend pic.twitter.com/wQZO8iPO8O

The poster and trailer combo got Twitter (Black Twitter, especially) extra hyped for the already highly-anticipated film, which features a predominately black cast and is the first superhero film with a black superhero lead.

this bit of the black panther teaser trailer had me sweating, look at those queens pic.twitter.com/DAmc8u3xko

Black Twitter praying 45 doesn't get us blown up before we get to see Black Panther pic.twitter.com/dA3L8UVjta

Me going to see Black Panther in February pic.twitter.com/sCoCbkK341

What y'all wearing to go see Black Panther movie?
Me: pic.twitter.com/OekDgUCFKu

how we stepping into the black panther premiere pic.twitter.com/yT4MK9n07Q

I can't wait to see Black Panther — that trailer is incredible.

me looking for these all Black screenings for Black Panther pic.twitter.com/XxXEVcFQ9d

This already feels like the greatest movie I've ever seen. #BlackPantherSoLit #BlackPanther pic.twitter.com/BB6MKMeoNS

My Black Panther outfit is going to be so extra… pic.twitter.com/luQ4QoeXzP

Though we may want the film now, unfortunately, there’s a long wait until the Ryan Coogler directed film hits theaters. Black Panther will be released February 16, 2018.

At least we have ample time to plan out outfits.