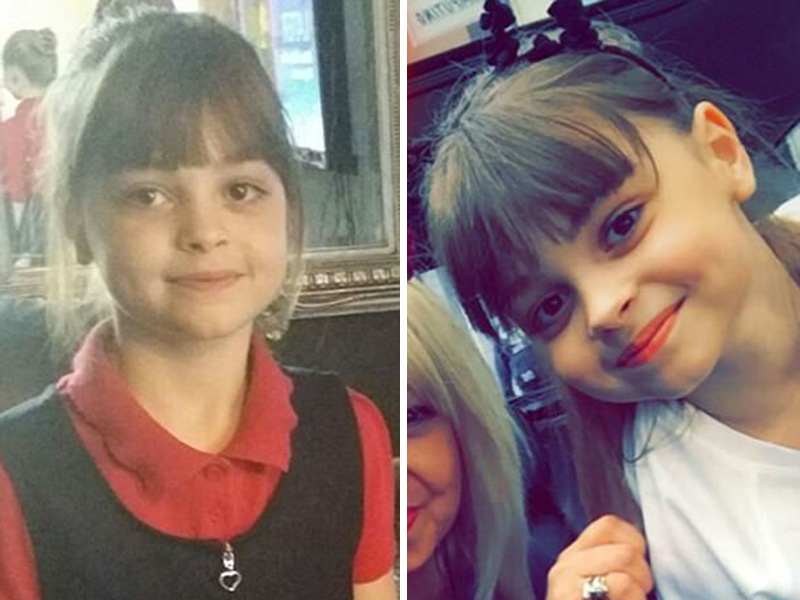 Another victim of the suspected suicide attack at the Ariana Grande concert in Manchester has been identified.

8-year-old Saffie Rose Roussos, described to the media as a “beautiful little girl,” was reportedly at the concert with her mother Lisa and sister Ashlee Bromwich at the time of the terrorist attack, which has left at least 22 dead and 59 injured.

According to The Guardian, Roussos’ mother and sister were among the injured and were being treated at separate hospitals. It is believed that Saffie Rose was the youngest of the victims.

Chris Upton, the headteacher at Tarleton Community primary school, where the eight-year-old was a pupil, said in a statement: “Saffie was simply a beautiful little girl in every aspect of the word. She was loved by everyone and her warmth and kindness will be remembered fondly. Saffie was quiet and unassuming with a creative flair.”

Upton added that the news of Saffie’s death came as a tremendous shock. “The thought that anyone could go out to a concert and not come home is heartbreaking,” he said, adding that the tight-knit school would be helping staff and pupils cope with the shocking news.

The first victim to be named in the aftermath of the attack was 18-year-old Georgina Callander, who was said to be one of Ariana Grande’s biggest fans.

According to David Ratcliffe, the medical director of North West ambulance service,twelve children under the age of 16 were among the 59 casualties taken to the hospital after the attack.

More from The Guardian:

Parents of other missing concertgoers continued to search for their children the day after the Manchester Arena attack, visiting hospitals and posting photos of their loved ones on social media.

About 21,000 people, many of them children and teenagers, were in the arena when a bomb exploded in the foyer at about 10.30pm.

Greater Manchester police have told people who need help or assistance togo to gate 11 at the Etihad Stadium, Manchester City football club’s ground. An emergency phone number set up to help people is 0800 096 0095.

Deborah Hutchinson, from Gateshead, went to Manchester on Tuesday morning in the hope of finding her teenage daughter Courtney, who has been missing since the attack. In an appeal on Facebook, she wrote that Courtney was with her partner, Philip Tron, and by 8am on Tuesday neither had been located.

She wrote: “My daughter Courtney Boyle and partner Philip Tron have gone missing tonight in a attack at Manchester tonight please share and help find them I need them home safe xX.”

Charlotte Campbell told BBC Radio 4’s Today programme that her 15-year-old daughter, Olivia, was still missing. She said she had spoken to her at the concert. “She’d just seen the support act and said she was having an amazing time, and thanking me for letting her go,” she said. Olivia was with her friend Adam, who was found in hospital, but Olivia had not been seen.

She said social media had been wonderful for spreading the news about Olivia being missing. She added: “They’ve basically told me to stay put and wait for a phone call. I daren’t leave the house just in case she somehow gets home.”

The band Little Mix tweeted an appeal for information on Chloe Rutherford, 17, and her friend Liam Curry, 19, who have been missing since the blast. The pair are from South Shields, South Tyneside, the hometown of two members of the band.

Please if anyone has information on the whereabouts of Chloe Rutherford and Liam Curry contact 07920405015 @staceylghent #Manchester pic.twitter.com/Zgrvu3qS38

In the early hours of the morning, a family from the Philippines told the Guardian they were searching for a missing loved one at Manchester Royal infirmary.

A 17-year-old girl, who asked not to be named, said she was looking for her mother, last seen in the post-explosion chaos. Her mum’s injured boyfriend had been located, but her mother remained missing.

Manchester Royal infirmary’s accident and emergency department was in “complete lockdown”, according to staff. “It’s a crime scene,” said one, pointing to police forensics officers going in and out of the hospital with plastic evidence bags.

Police officers guarded the doors, behind two red signs saying “major incident – no entry”. As ambulances began to arrive at about midnight, staff cleared A&E of all patients unconnected to the blast.

At about 2.30am two more ambulances pulled into the children’s A&E, followed by a van carrying blood supplies. Throughout the night relatives arrived to see if their loved ones were at the hospital. Some found them, but others left again to check other hospitals.

Steve Rotheram, the Liverpool city region metro mayor, said his daughters had been at the venue and thanked the taxi driver who “eventually got through the traffic to pick up my two girls”.

All my thoughts go out to those parents waiting to hear of the safety of their children. It's a parents worse nightmare. So, so sad.

Stuart Aspinall, 25, said he was trying to find his friend Martyn Hett after they were separated towards the end of the gig. Aspinall shared photos of the 29-year-old, from Stockport, on Facebook.

He wrote: “The more news that is coming out, the scarier this is getting. There was an explosion at the Ariana Grande concert tonight in Manchester and I haven’t seen my friend Martyn since.”

Greg Southern told the Guardian he was sitting in the same row as Hett. “I don’t know him but he was on the row I was on. He was stood on the exit steps on the end of our row,” Southern said. He recognised him from photos shared on Twitter. “We were at the other side of the arena from where the explosion took place. The concert had just finished and the lights had just come on. There was this absolutely tremendous bang and everybody panicked at that point.”

The audience included many young teenagers, he said. “I was there with my boyfriend, but next to us there were maybe three groups who must have been young teens, 15 or 16. In the row behind was a mother with children. The majority of people were quite young.”

The parents and friends of Laura MacIntyre and Eilidh MacLeod, both 15, from the Hebridean island of Barra, issued urgent appeals after they went missing. One of the girls’ aunts confirmed the pair had not contacted relatives since the blast.

On Facebook, Margaret MacNeil said: “Please please please share! My niece and her friend were at the Ariana Grande concert tonight and there has been no contact since the explosion. Please let us find the girls safe and well. They are Eilidh MacLeod and Laura MacIntyre.”

Laura’s father, Micheal, also issued an urgent request on Twitter for help in tracing his daughter.

Angus MacNeil, the Scottish National party MP for the Western Isles, said he knew the MacIntyres, and had spoken to both girls’ fathers on Tuesday morning. “I just can’t begin to get to the depths of their worries,” he said. “They are without doubt missing.”

He said Eilidh MacLeod’s father and members of the MacIntyre family were travelling to Manchester.

Jordan Howe was searching hospitals in Manchester to try to find his missing stepmother, Alison Howe. “We haven’t heard anything yet. I am just about to go into another hospital, we have been looking in the hospitals for her,” he told the Guardian.

Sasha Howe, from Oldham, said her mother and family friend Lisa Lees had gone to the arena to pick up their daughters from the concert. The two girls had been found, but Lees and Howe were both still missing. “[We’ve] heard nothing,” Sasha told the Guardian.

Another of the missing was Kaia Kopusar, 17, according to her friend.

Ecrin Javakovic told the Guardian Kaia was from France and had travelled to Manchester for the gig. “There is still no news of her,” she said. Kaia’s parents, who are in France, had been phoning hospitals in Manchester for news of her but had heard nothing, Javakovic said.