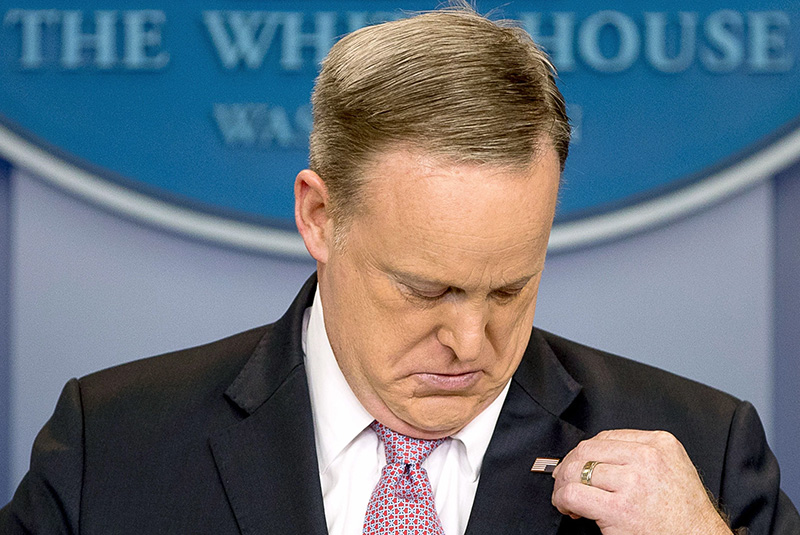 During a press conference today, walking SNL material-generator Sean Spicer took to the podium rocking the customary American flag pin. But it didn’t take long for the press, and the internet, to notice that his flag was upside down.

It wasn’t until a Fox News reporter pointed out the mistake that he finally fixed it, but as Swae Lee knows, the internet moves fast and the moment was quickly captured. While some would call it a simple mistake, others are saying it is a discreet cry for help for Trump’s press secretary.

As most House of Cards fans know, an upside down flag is a sign of distress, meant to signal that something is wrong and help is needed. So when people saw Spicer sporting this variation of the flag, people saw it as a cry for help.

Spicer's flag pin is upside down…

….it's a cry for help! pic.twitter.com/7uWj9tnAHE

Sean Spicer wearing pin upside down was completely appropriate given how this Presser went. https://t.co/FcUEoUZyhr pic.twitter.com/HCbfx6GtQM

I'm not certain, but I'd wager Sean Spicer's upside down flag pin was a secret cry for help. @PressSec we can help, you just gotta open up. pic.twitter.com/SBZDfCrsbQ

Others took it a different way.

Not surprised Spicer didn't know his pin was upside down, it's hard to see with his head so far up Trump's ass #PressBriefing pic.twitter.com/APqcTEMTnm

Interesting theory being explored: He's a complete and total idiot.

Even the House of Cards Twitter got in on the action.

Your loyalty has not gone unnoticed. https://t.co/ba1kz1yvXF

Luckily for all of us, this happened on a Friday afternoon, so hopefully we’ll be seeing Melissa McCarthy having some fun with it tomorrow night on SNL.