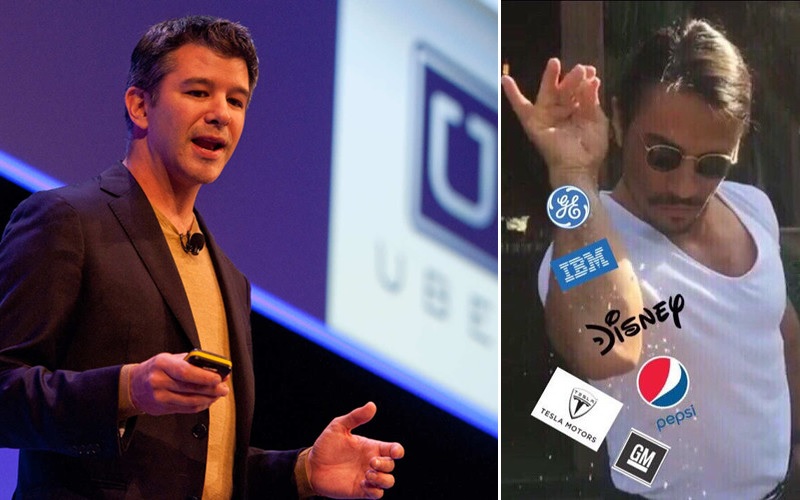 Social media is not playing games with Uber. Just days after the #DeleteUber campaign became a trending topic, social media is now coming for Uber CEO Travis Kalanick for dry snitching on other well-known CEOs who are serving on an advisory board for Donald Trump’s administration.

The company faced a PR nightmare after it seemingly tried to profit from the New York City taxi drivers’ strike at JFK Airport in protest to President Trump’s travel ban executive order. Uber ignored the strike and continued to offer services, even turning off its surge pricing to lower costs of a ride. This sparked the #DeleteUber hashtag.

In addition, Kalanick also serves on a business/economic advisory board for the Trump administration, along with other business leaders. The board is known as the Strategic and Policy Forum.

In response to the backlash, Kalanick issued a statement and defended his relationship with Trump. Apparently tired of being the only one taking the heat, he also revealed the names of several other CEOs serving on the board too.

We partner around the world optimistically in the belief that by speaking up and engaging we can make a difference. Our experience is that not doing so shortchanges cities and the people who live in them. This is why I agreed in early December to join President Trump’s economic advisory group along with Elon Musk (CEO of Tesla), Mary Barra (Chairwoman/CEO of General Motors), Indra Nooyi (Chairwoman/CEO of Pepsi), Ginni Rometty (Chairwoman/CEO of IBM), Bob Iger (Chairman/CEO of Disney), Jack Welch (former Chairman of GE) and a dozen other business leaders.

Twitter did not care for Kalanick’s snitching and definitely let it be known.

Uber CEO as a kid pic.twitter.com/8U5Rl9Nnyn

Public: Why you supporting Trump?

lmao all those CEOs looking at the Uber CEO like https://t.co/RNoJxq65Gh

Uber CEO when he dropped the press release snitching on other CEOs lol pic.twitter.com/cW80fws8x5

That Uber CEO said "if I'm going down, all these other CEOs going down wit me." pic.twitter.com/qsdZn51m0g

This the UBER CEO when he say #DELETEUBER trending #NoSnitching pic.twitter.com/k41me7buDe

He has also since joined hundreds of other CEOs and tech leaders opposing the “Muslim ban” and signed a petition urging Trump to rescind the executive order.

All good efforts, however, I think the damage is already done and it seems Twitter really does not like snitches.