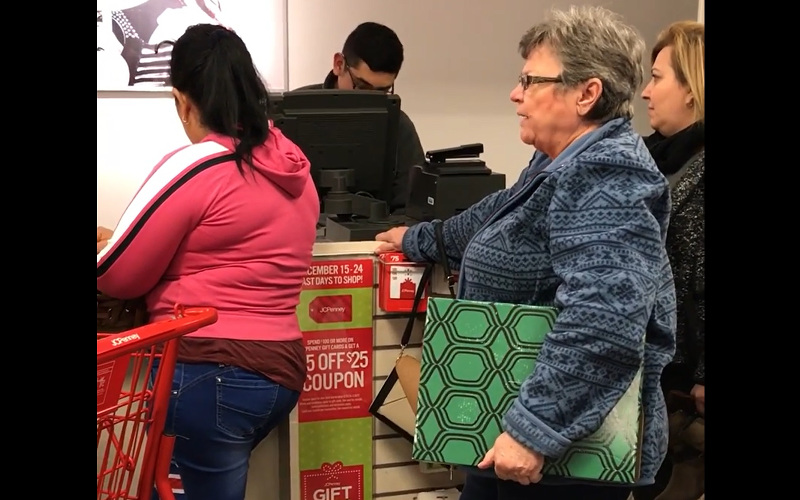 A white woman is likely to be permanently banned from a Louisville, Kentucky mall after her racist outburst against two Hispanic women went viral.

The video shows two Hispanic women standing at a checkout counter in what has now been identified as the JCPenney in Jefferson mall. Standing behind them is a white woman who taunts the women with harsh language and racist comments. The rant carries on for several minutes, but only a brief portion was captured on video.

“Go back to wherever the f**k you come from lady.

“Just because you come from another country, that don’t make you nobody. You’re nobody, as far as I’m concerned. Probably on welfare. The taxpayers probably paid for all that stuff.

“Speak English. You’re in America. If you don’t know it, learn it.”

Though the beginning of the white racists tirade was not captured, she apparently felt one of the women had cut the line. One of the women had already paid for her items and given a receipt when the second woman approaches and lays her items on the counter. The white woman felt the Hispanic woman should go to the back of the line. However, this still doesn’t explain the racist and hate-filled speech that followed.

What’s truly astonishing is that the two women being dehumanized are largely silent, nor does any of the customers take a defiant stand against the racist lady.

The video was posted by Renee Buckner (a customer in JCPenney at the time) on Tuesday (Dec. 20). “I had to get back on FB, to expose this racism in America/Louisville. If we ignore it, it will never go away,” Buckner wrote.” She has since deactivated her account due to overwhelming messages regarding the video.

Jefferson Mall plans to “permanently ban” the woman from the mall, once she is identified, for violating the mall’s Behavioral Code of Conduct.

Louisville Mayor Greg Fischer has also issued a statement and offered an apology to the two Latina women:

I am sad and disappointed to see conduct like this, when one person so dehumanizes another human being. This is not who we are, and on behalf of our community, I apologize to the two women who were treated in such a horrible way. I hope this video prompts many discussions among families as they gather for the holidays this week – discussions about basic human values, dignity and respect. As a country of immigrants, we must understand that we only move forward through peace, acceptance and embracing those who are different from us. These are basic American values protected in our Constitution, values embraced in this welcoming, compassionate community.

It’s a nice sentiment by Mayor Fischer, but the Jefferson Mall incident is further proof racists are coming out really strong right now. Bold and without any fear because they know (or at least feel) Donald Trump has their backs.