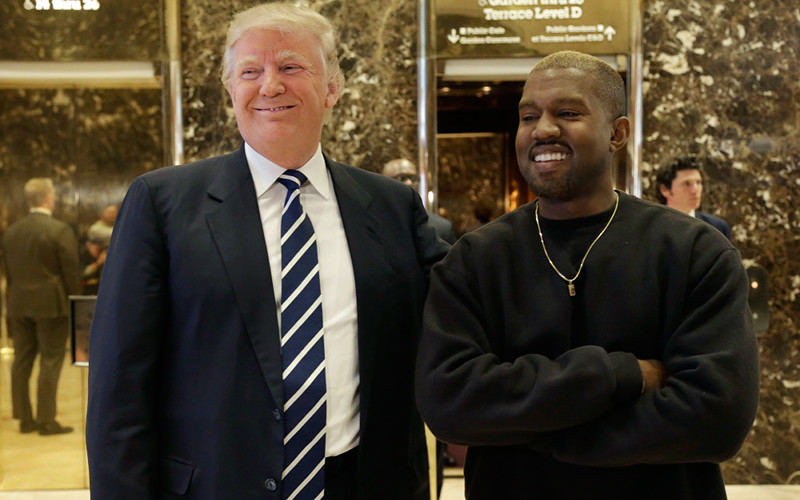 President-elect Donald Trump has no time for intelligence briefings, but he apparently has time for Kanye West. The recently hospitalized rapper shocked the media and Twitter today after arriving at Trump Tower for a meeting with the President-elect.

Making only his second public appearance since being released from the hospital, Kanye caught everyone off guard as he entered Trump Tower to sit and chat with Trump. Many were not sure what to make of the unexpected meeting.

Kanye (and entourage) arrives for a meeting at Trump Tower. Real life. pic.twitter.com/W9PQDgfQmg

Kanye eventually took to his own Twitter account to explain his visit to Trump Tower. Amongst other things, he says he wanted to discuss “multicultural issues” with the president-elect.

Even more perplexing is that it seems Kanye is willing to give Trump 8 years, as he appears to push back his own presidential run until 2024.

Following their meeting, the two briefly spoke to press in the Trump Tower lobby. “He’s a good man. We’ve been friends for a long time,” Trump said of Kanye. He says their conversation was about “life.”

Kanye did not engage with press at the time, stating “I just want to take a picture right now.”

"We've been friends for a long time": Kanye West and President-elect Donald Trump appear together at Trump Tower https://t.co/o1rQ4tF0NU pic.twitter.com/BPbpibiJPr

It’s been reported that Trump is having a hard time booking A-list performers for his upcoming inauguration. Days prior to his “psychotic episode,” Kanye revealed onstage that he would have voted for Trump had he actually voted in the 2016 election. Some assumed the meeting meant Kanye was being tapped to perform at the inauguration. Which, honestly, still might not be out of the question.

With Kim Kardashian’s robbery and his nervous breakdown, the rapper has seriously been going through it these past few months. Dealing with mental health issues is no joke, so I initially was willing to let this go. But Twitter let him have it!

I miss the old Kanye.
The bad mood Kanye.
The always rude Kanye.
I hate the new Kanye
The Trump-Pence Kanye
Sit on the fence Kanye
Etc.

Kanye can post all those empty tweets all he wants, but he met with Sunkist Stalin to go beg for more white validation per his usual.

Is Kanye West for real, for real cancelled or is there hope the musical genius can find his way back? You know what, I blame the Kardashians!