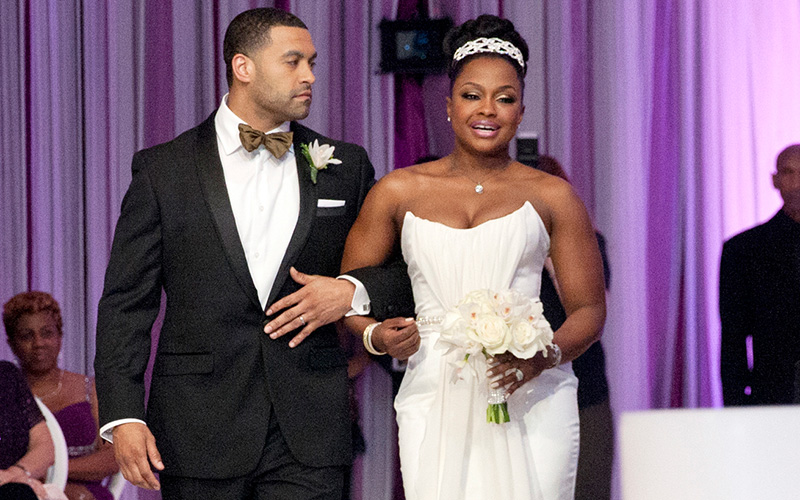 Many people have said that 2016 has been a rough year, but Phaedra Parks is definitely one of the few who can claim that 2016 really hasn’t been shit.

After Apollo’s conviction and imprisonment for fraud, Phaedra quickly sought to shed him like a snake does with its skin.

Apollo, however, has made the divorce process difficult and put up a fuss along the way. Phaedra recently announced to the world that her divorce to Apollo had been finalized in an interview with TMZ.

Not so fast though. Apollo says Phaedra’s claims are fraudulent, and as a federally convicted two-timer, I suppose he is the expert on all things counterfeit and deceitful.

I don’t know if this is Apollo just letting his petty show or if he just wants to be the one to initiate the divorce rather than Phaedra, but Apollo is claiming that the divorce isn’t finalized because their last names were purposely misspelled on the documents, reports TMZ. According to the docs, their last names were spelled as “Nita” instead of “Nida.” It’s a move that Phaedra allegedly made to preserve their privacy.

Apollo Nida refuses to accept his divorce from Phaedra Parks is a done deal, and his reason — spelling counts.

Apollo points out his ex’s legal name is Phaedra Parks Nida, but in her divorce docs it’s spelled “Nita” — ditto for the spelling of his name in those docs.

He’s now filed a motion to vacate her divorce, but not only due to the typos. In the motion, obtained by TMZ, Apollo says the ‘RHOA’ star took advantage of the fact he’s in prison. He says there was a final hearing in July, but he was never notified of it … and therefore, the divorce should be thrown out.

While Phaedra may have been shady for the switcheroo with the last names, it’s kind of a head scratcher that he’s raising a fuss now, because for the divorce to have gone through, Apollo must’ve signed the paperwork. So why is he just now raising a fuss about these misspelled last names? Frankly, Apollo doesn’t strike me as a grammar nazi (honestly, I’m surprised he can read) so there’s clearly another motive in the works.

Whatever it is, Apollo needs to let sleeping dogs lie and just move on with his new bae and leave Phaedra alone.