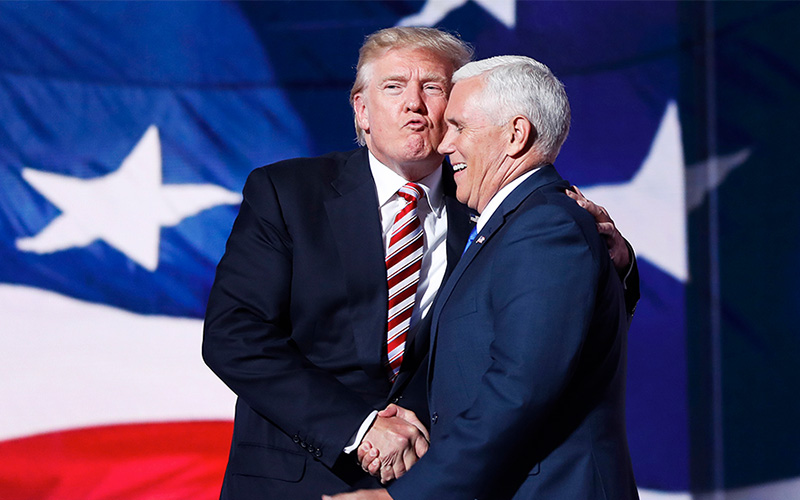 Donald Trump is extremely butthurt over Mike Pence getting booed at Hamilton and being lectured by the cast during last night’s performance.

Before Friday night’s showing of Hamilton, as he made his way to his seat, Pence was loudly booed by the audience, and the whole thing was caught on video, which instantly went viral on Twitter.

At the end of the show, as Pence was walking out, the cast (via Brandon Dixon) addressed him directly, in a very respectful manner, mind you, asking him if he would stick around for a special message.

Tonight, VP-Elect Mike Pence attended #HamiltonBway. After the show, @BrandonVDixon delivered the following statement on behalf of the show. pic.twitter.com/Jsg9Q1pMZs

“We have a message for you sir, we hope that you will hear us out,” Dixon said. “We, sir, we are the diverse America, who are alarmed and anxious that your new administration will not protect us, our planet, our children, our parents or defend us and uphold our inalienable rights. But we truly hope that this show has inspired you to uphold our American values and to work on behalf of all of us.”

Trump, who is just two months away from being inaugurated as the 45th president of the United States, obviously didn’t take his VP-elect being criticized too well, because Saturday morning (Nov. 19), he took to Twitter claiming that his running mate was “harassed by the cast of Hamilton” and demanding that they “apologize” for being “very rude to a very good man.”

Our wonderful future V.P. Mike Pence was harassed last night at the theater by the cast of Hamilton, cameras blazing.This should not happen!

The Theater must always be a safe and special place.The cast of Hamilton was very rude last night to a very good man, Mike Pence. Apologize!

It didn’t take long for Dixon, who plays Aaron Burr in the show, to respond to Trump, also via Twitter, saying that that they simply held a “conversation” with Pence, which “is not harassment,” and he also praised Pence for actually listening to said conversation.

conversation is not harassment sir. And I appreciate @mike_pence for stopping to listen.

Meanwhile, the hashtag #BoycottHamilton is trending on Twitter, because there are a large number of people in this country who obviously don’t believe in the First Amendment of the United States Constitution.

Im very dissappointed in the treatment of our Vice President Elect @mike_pence. Of course @realDonaldTrump will defend ALL #BoycottHamilton

Of course, most of Twitter looks at this whole #BoycottHamilton thing as one of the biggest jokes of the year:

#BoycottHamilton? Good luck with that. Tickets are already sold-out past President-elect Troll's impeachment.

Like those supporting #BoycottHamilton can even COP a tick in the 1st place. This just becameTHE HOTTEST ticket in town yet AGAIN.

Hey everyone #BoycottHamilton so I can actually get some tickets thanks

I'm here to help! For those joining the #BoycottHamilton I'll take two tickets of your hand for any show during the coming week.

Yes, people should #BoycottHamilton! Show your support by taking a pic of your tickets & posting online! Make sure the barcode is visible!

— wikipedia brown told Santa the truth about you (@eveewing) November 19, 2016

You know what? I support #BoycottHamilton. I hope it intensifies — especially during the first week of March, maybe that Sunday matinee?

#BoycottHamilton? How can you boycott something that is sold out until late 2017? You got imaginary tickets? pic.twitter.com/qCKuARq2v6