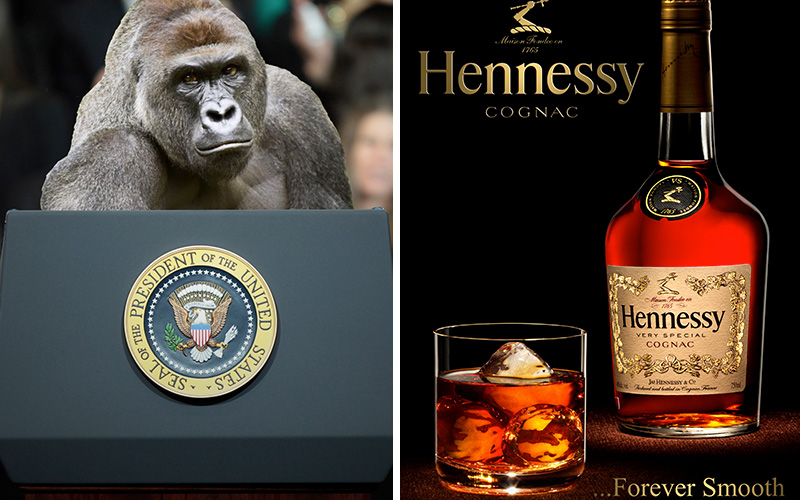 It’s the day after “Election Day 2016,” and while everyone is trying to figure out what was so wrong with our country that it decided to elect a man like Donald Trump as president comes “news” about a crazy rumor suggesting that a large number of Americans literally PLAYED with their vote by voting for an animal (or a bottle of liquor) instead of the 2 humans chosen to represent our nation’s biggest political parties.

When faced between “corrupt/lying” Democrat Hillary Clinton and “racist/sexist/xenophobic” Republican Donald Trump, many Americans were vocal about not being able choose what side of history they wanted to be on, which is totally understandable. Lots of Republicans didn’t want to vote for Trump, and, for what it’s worth, lots of Democrats didn’t want to vote for Clinton, which made things overall VERY confusing and/or frustrating.

not mine but i saw it om facebook pic.twitter.com/10hgDUno2g

There are claims online that Harambe received an INSANE amount of votes — over 10,000 — however, because “Harambe” (and “Hennessy” too) — were write-in votes, they weren’t officially counted. This means that while some people likely did vote for “Harambe and Hennessy,” it would be nearly impossible to know the exact number.

Even though this was clearly a close race, it’s also highly unlikely that those votes effectively “gave” Trump the election, considering his margins were more than 50,000 in some of the states he won.

But that hasn’t stopped Twitter from being pissed off and expressing their distaste for American citizens who basically threw away their votes (even though the number hasn’t been confirmed):

11,000 votes went towards Harambe. Eleven. Thousand. Votes. Towards a deceased gorilla. This is America people, this is America.

#HARAMBE had 11,000 votes. That's right 11,000 of you dumbassss actually went through with it. Congrats. #ElectionNight pic.twitter.com/KuOroaIfd9

is this because of harambe

11,000 people voted for Harambe. Let me remind you that Harambe is a dead gorilla.
Those 11,000 votes could have saved our country.

11,000 of you wrote in Harambe & the most of you don't get the difference in your/you're and you're upset with our two presidential choices.

I've completely lost faith in my generation simply because around 17,000 people voted for harambe and Hennessy

Over 16K people voted for Harambe and Hennessy. Let that sink in. 16 THOUSAND PEOPLE VOTED FOR A DEAD GORILLA AND LIQUOR.

16,000 people voted for Harambe and Hennessy. Adults legit used their vote on a dead gorilla & liquor. TELL me this year isn't a giant meme

So, the answer to your question of “Did 15,000 Americans REALLY vote for Harambe (or Hennessy)?” is probably NO.

Maybe a few hundred threw away their vote for a dead gorilla and/or a bottle of liquor, but anyone who is reporting numbers in the thousands are probably basing it on this fake report from satire website Daily Snark and shouldn’t be trusted anyhow.