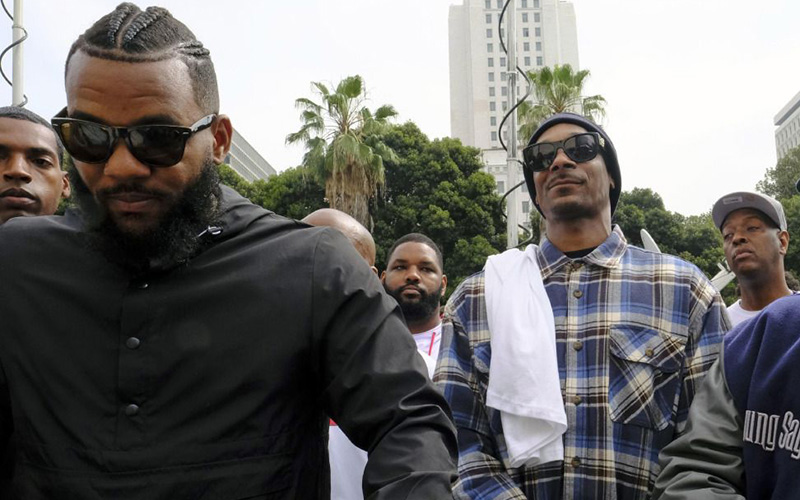 Just hours after the shooting that claimed the lives of five Dallas police officers during a Black Lives Matter protest, rappers the Game and Snoop Dogg led a peaceful march on the LAPD headquarters just in time for the graduation of the law enforcement agency’s latest recruits, according to The Los Angeles Times.

Jayceon Terrell Taylor, aka “The Game,” sent out a message via Instagram at 6:30 a.m. Friday morning, calling upon men of all races to participate in a march to the Los Angeles Police Department’s headquarters. The goal was to “make the Californian government & it’s law branches aware that from today forward, we will be UNIFIED as minorities & we will no longer allow them to hunt us or be hunted by us !!!”

Organizers started organizing the march before dawn. Roughly 50 men arrived to show their support. The Game encouraged women and children to forego the event.

“THIS IS OUR MISSION FOR THEM,” the Game wrote in his post.

Participants wore shirts emblazoned with the achronym H.U.N.T. (Hate Us Not Today, Hunt Us Not Today).

Organizers were not aware of the graduation ceremony, Snoop Dogg, whose real name is Calvin Broadus, told reporters. Hip Hop mogul and philanthropist Russell Simmons was also spotted out there.

The Game, who hails from Comton, led the march out of a sense of civic, moral and personal responsibility.

Organizers took precautions to ensure the event was a peaceful one by asking attendees not to bring “any weapons or anything illegal” and educating participants of the H.U.N.T. movement’s “unifying, peaceful message, so it couldn’t be misconstrued by police, and conversely, so they would listen when law enforcement responded.”

“We don’t have to fear each other today,” the Game posted.