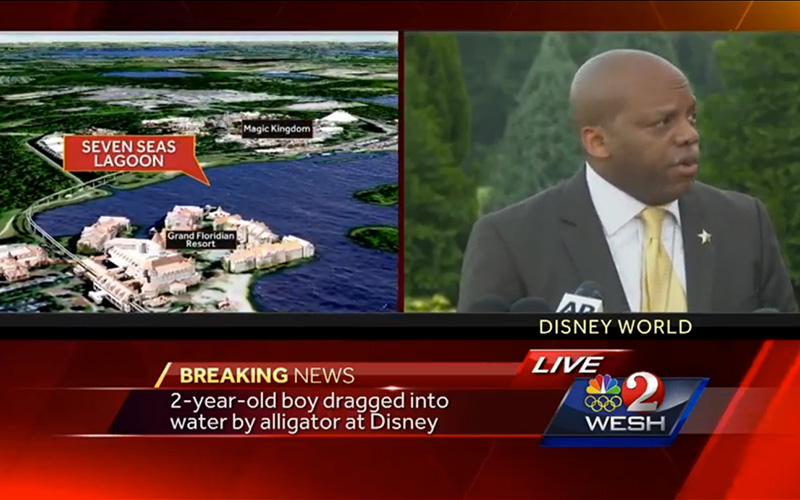 This has not been a good week for the city of Orlando, Florida.

Following the tragic murder of singer Christina Grimmie and the mass shooting at Pulse nightclub, in which 49 innocent people were killed, police are looking for a 2-year-old boy that was attacked by an alligator and dragged into the water at a Walt Disney World hotel.

The incident occurred Tuesday evening (Jun 14) around 9:30 p.m. at the Seven Seas Lagoon of the Grand Floridian Resort & Spa, not too far from the Magic Kingdom theme park.

Sheriff Jerry Demings of Orange County said that the child’s father jumped in the water and tried to save him, but was unsuccessful.

“The father entered the water and tried to grab the child and was not successful in doing so. The mother also may have been in the water. So the parents diligently tried to get the child,” Demings said.

The boy’s family is from Nebraska and they were on vacation with their three children. Authorities have not released their names.

Sheriff Demings said the attack reportedly happened in an area of the Seven Seas Lagoon where “no swimming” signs were posted. The alligator was estimated to be anywhere from 4 to 7 feet long, though its exact size wasn’t known.

“Everyone here at Walt Disney World Resort is devastated by this tragic accident,” a Disney spokesperson said in a statement. “Our thoughts are with the family and we are helping the family and doing everything we can to assist them.”

Sheriff Demings went on the record to say that search and rescue teams would not be leaving until the child is found.

Sheriff understands challenges of saving 2-yo from alligator, but "we're not leaving until we recover the child." pic.twitter.com/xQ34AfFvSB

Large and active scene here at #Disney's Grand Floridian resort after a toddler was dragged into the water pic.twitter.com/5yhJ5vZ9LY