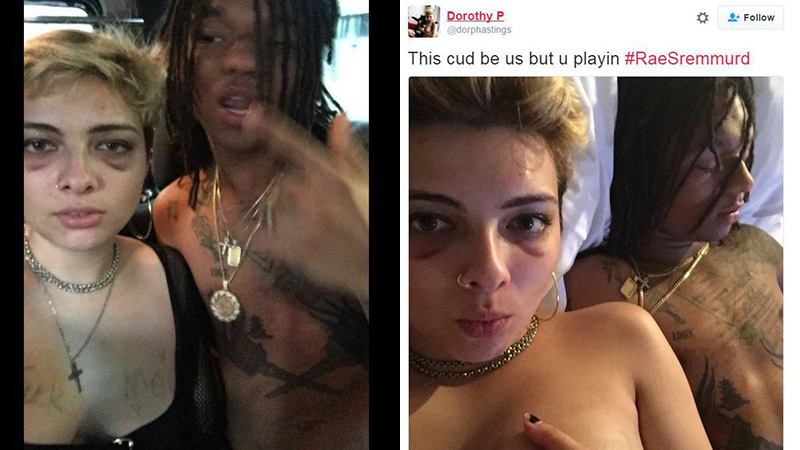 Rae Sremmurd wasn’t lying when they said they ain’t got no type.

This past weekend, one half of the rap duo, Swae Lee was exposed by a female groupie, who claims the two got down and dirty in the sheets.

After a photo of Swae and the woman laying in bed together surfaced online, the groupie, who goes by Dorothy P, bragged on Twitter about how she was able to get some celebrity D, despite her horrible appearance.

The pic, which shows Dorothy with two black eyes and the words “F*ck Me” scribbled across her chest, caused many to speculate Swae may have put his hands on her.

She eventually confirmed the bruises were due to a skateboarding accident.

Swae, on the other hand, is telling a totally different story. He claims the woman was a third wheel and posted a NSFW video on his Twitter of what really went down.

But if I leaked the video y'all would know what really happened ???

In the video, Swae is seen lying beside a woman (not Dorothy) who has a baseball cap on with a red cup in her hand. Dorothy appears to be lying above Swae and the other woman, but only her breast can be seen in the video. For what it’s worth, the chick with the cap on was actually hot. Dorothy on the other hand, well… we’ll just leave that to Twitter:

@iHipsterLee the brunette was gorgeous.. That other chick (blonde) looks & seems like straight trash tho.. Def basic.

@iHipsterLee bruh set a better example for a Mississippi dude…I'm white and I woulda never let the junkie in the room..friend was bad tho

Meanwhile, Dorothy P is taking her newfound fame in stride. Sort of.