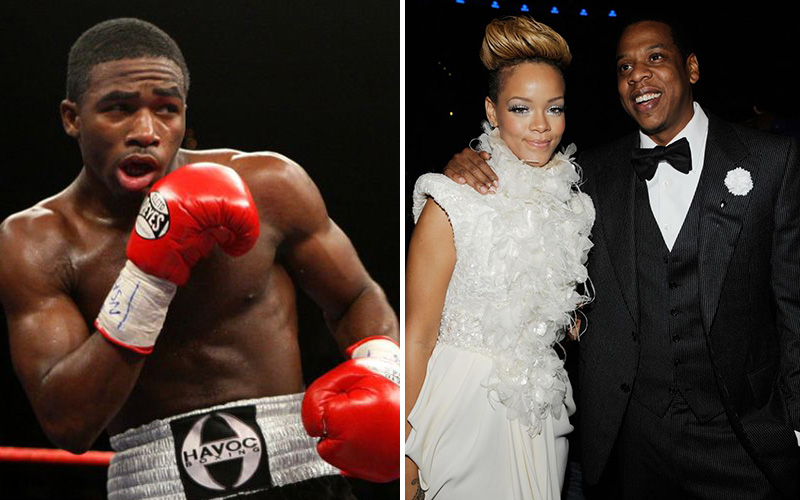 Adrien Broner may not be the sharpest tool in the shed, but at least he knows when he’s done (and/or said) something stupid.

The controversial boxer has issued an apology to Jay Z and Rihanna after he dissed them last week on Facebook and in an interview with TMZ Sports.

Broner made headlines last week when he revealed he was presented with an offer to sign a 5-year contract with Jay Z’s Roc Nation Sports for $40 million, an amount that apparently offended Broner and he let it be known via Facebook, telling the rap mogul to “suck [his] dick with a elephant tongue.”

These the type emails I turn down. Fuck JAYZ Shit real out here #AboutBillions What the fuck is 40 million for 5 years ha somebody go tell JAYZ to suck my dick with a elephant tongue WE GOOOOOD!!!!!!

When TMZ Sports caught up with Broner regarding his remarks, he reiterated his comment on Facebook, claiming Jay’s offer was less than what he’s worth and he felt “disrespected” by the deal.

He also went after Rihanna, who is signed to Roc Nation under their artist management division, saying the only thing she’s good for is pussy.

“Man, fuck Rihanna. No disrespect. Rihanna ain’t gon make me no dollar and she don’t make no dollar for me, man. At the end of the day, she gon’ give me some p*ssy and that’s it.”

Now the boxer, who has a record of 29 wins to one loss, has backtracked on his statements about Jay Z and Rihanna, apologizing to the entertainers in a second interview with TMZ.

“I’ve gotta address something because I’m getting a lot of feedback from this interview I did with TMZ,” Broner said. “I was going to let it ride out and say, ‘Forget the haters,’ but my big homie called me, somebody that I respect, and he made me understand why I was wrong.”

The “big homie” Adrien is referring to is likely 50 Cent, who told TMZ a few days ago he thought Broner turning down Jay Z’s offer and also disrespecting the Hip Hop titan was a terrible idea.

“You never invite another man to another man’s private parts. That’s just ridiculous,” Broner told TMZ. “I was caught up in the moment and I want to apologize to Jay for that. I’m a man at the end of the day. I’m wrong and I can admit when I’m wrong.

Adrien also felt bad for what he said about Rihanna. “I never should have said ‘Forget Rihanna,’ he added. “I said it in a more explicit way. I’m wrong, I’m sorry. If Jay wants to talk to me, you can get in touch with me and we can talk about it.”