GOSSIPONTHIS.COM LOL British Woman Loves Ketchup So Much She Consumes 104 Bottles Per Year 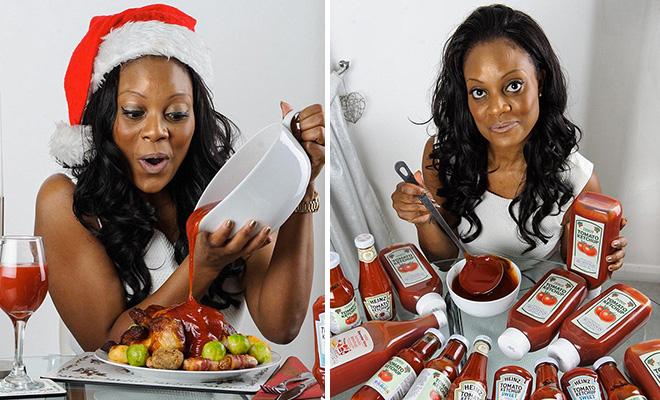 Most of us simply “like” ketchup, and some of us even “love” the red tomato stuff, but we don’t think many people obsesses over ketchup quite like one British woman does.

30-year-old Samantha Archer from London says she’s been obsessed with ketchup since she was fives years old, and she goes through up to two bottles a week and more than 100 bottles per year, which causes her to spend more than $300 over a 12-month period.

The Daily Mail did an entire feature on Ms. Archer, and she told them she smothers everything she eats with ketchup. She even eats … wait for it … KETCHUP SANDWICHES.

According to DM, this is a typical daily meal plan for Samantha:

Dinner: Chinese takeaway smothered in ketchup or stew and rice or chicken curry – all flavoured and topped with ketchup.

Snacks: A slice of ham filled with ketchup and folded into parcels or ketchup from a spoon.

Archer says her obsession with ketchup is so real that her family knows to keep a bottle of the red stuff on hand because “they don’t want any trouble.” She’ll even be dousing her Christmas dinner with ketchup.

“I have ketchup on every meal and my Christmas dinner will be no different – Brussels sprouts and pigs in blankets dripping in ketchup is heaven. I am spending Christmas Day with my aunt and she is cooking for me. She always says I won’t be able to taste the food she has cooked. But I can still taste the flavours – the ketchup just makes it better. I have it on absolutely everything, I can’t think of anything I don’t add it to.”

Archer adds that she is so obsessed with ketchup that she eats it straight from a spoon as a “quick fix,” but she’s adamant that covering her food with copious amounts of ketchup doesn’t ruin the taste of her meals.

“It takes me five minutes to dress my plate with sauce, I just love it. My friends and family are all used to my habits now and they keep a bottle to hand just in case I run out. And if they come round to visit they can expect to be fed ketchup.

“If I went out on a date I would warn them that I love tomato sauce – but people can never believe how much I actually put on the plate. They think I am joking. I don’t know what I would do if I couldn’t get my hands on ketchup, I would just have to find some before I could eat.

“I think the only thing I don’t add tomato sauce to is soup. But I don’t really eat soup – that is probably why.”