GOSSIPONTHIS.COM Celebs Cam Newton on Car Accident: “Someone is Supposed to Be Dead or... 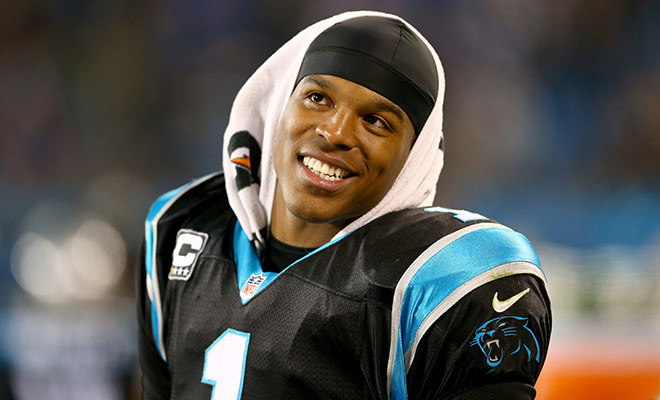 Cam Newton has spoken out for the first time since his car accident in Charlotte, North Carolina Tuesday (Dec 9).

The NFL star left the hospital with his parents Wednesday, nearly 24 hours after he was involved in a two-car crash that flipped his truck. Newton suffered two small fractures in his back, but “his spirits were high,” a Panthers spokesperson said.

Neither driver was blamed for the wreck, though two witnesses said they saw the car pull out in front of Newton’s truck at an intersection.

Newton was reportedly on his way to Bank of America Stadium, which was about two blocks from the crash site, when he and the car collided at the intersection ranked the fourth most dangerous in the city.

After Newton’s truck flipped, the Carolina Panthers quarterback climbed out of the shattered rear cab window and sat on the side of the road until help arrived. He was loaded onto a stretcher and transported to the Carolina Medical Center.

Wednesday night, Newton posted a horrifying photo of his totaled truck after the accident on Instagram along with a lengthy message.

“By the look of that picture, someone is supposed to be dead or severely injured worse than what I am right now,” he wrote.

I do not know where to begin because by the look of that picture soMEone is supposed to be dead or severely injured worse than what I am right now! While I am resting up the thought that keeps flashing in my mind is that GOD IS GOOD and someone has there protective hands on my life shielding me from any danger that may come my way!

I know one thing, YOU SHOULD BE ASHAMED OF YOURSELF “IF” you are holding a grudge against someone, “IF” you don’t tell the people that’s close and dear to you that “YOU LOVE THEM” every chance you get, “IF” your mad because something didn’t go your way today! L1FE IS TO SHORT FOR YOU NOT TO APPRECIATE IT TO THE FULLNESS; THROUGH THE GOOD AND THE BAD!

I thank you to the people who have been keeping me in there prayers and well wishes for a speedy recovery! I am appreciative for the many great things GOD has given me to be thankful for. It’s a old cliché statement but it says “GOD WORKS IN MYSTERIOUS WAYS!” And as that crash constantly plays back in my mind every time I close my eyes, I can’t go another day without me THANKING GOD for the opportunities he has given me in my life and this accident puts ALOT of things in perspective of what’s important and what’s not!

SHAMEonYOU if YOU go another second in life with holding a grudge or HATING on someone, taking life for granted, or just not appreciating the breath you just breathed; trust and believe there are plenty people with illnesses, people in the hospital, or even people that are 6ft under the earth that W1SH they had “another” opportunity to do so!

So if you read this I challenge you to L1VE life to the fullness everyday! 1OVE the people who are close to you (and don’t be afraid to tell them as well)! FORG1VE “whoever” for “whatever” they did! Trust when I tell you that L1FE is to short for you NOT to do those things! #THANKyouJESUSforALLOWINGmeTOseeANOTHERday

Cam will definitely this miss Sunday’s game against the Tampa Bay Buccaneers, but he told reporters during a news conference Thursday that’s the least of his worries. He’s just glad to be alive.

“I just can’t stop smiling because God has his hands on me,” Newton said. “I’m on somebody’s fantasy league (team). And I think it’s the man upstairs. It’s great to walk away from something like that.”

He added, “I’m just lucky to come out of there unscathed with just a little injury I did have … Every time I see that flashback or see that truck, I’m surprised that nothing seriously was done to me. I really appreciate everything from the simple prayers for you from fans, family members, peers and teammates.

“As far as when I’m coming back, who cares? That’s not something that I’m worried about right now. I’m just thankful to have breath in my lungs so I can breathe again.”