GOSSIPONTHIS.COM News The Internet Gets Into Heated Debate Over Reclining Airplane Seats 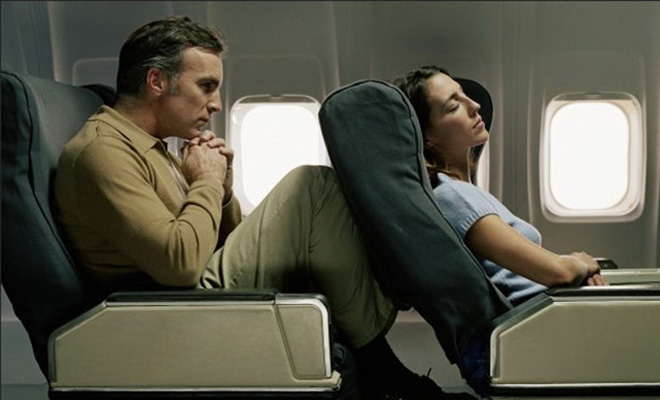 To recline or not to recline?

The Internet has gone to war yet again for yet another cause, and this time, it’s all over reclining airplane seats.

Earlier this week, a flight from New Jersey to Denver was diverted after two passengers got into a fight over a reclining seat. While no punches were thrown, liquid was, and it forced the pilot to have to land early at another airport so that authorities could handle the situation.

A male passenger who was seated in a middle seat was using something called the “Knee Defender” — a lock that attaches to the tray table and prevents the seat in front from reclining — on the United Airlines flight.

When the woman seated in front realized the man behind her was using something to stop her from reclining her chair, she called for a flight attendant to diffuse the situation, but it actually may have made things worse.

After the flight attendant asked the man to remove the device and he refused, the woman then stood up, turned around and threw a cup of water at him.

Things got so bad that the plane had to be diverted to Chicago’s O’Hare airport, where Chicago police and TSA officers met the flight and spoke to the disputing passengers — a man and woman, both 48, whose names aren’t being released.

Both passengers had been sitting in the plane’s “economy plus” section, which advertises “up to 4 more inches” of leg room, compared to regular old economy.

After deeming the incident a “customer service issue,” officials allowed the plane to continue traveling to Denver without the two passengers who caused the diversion, and it arrived about an hour and a half late.

The episode has stirred up an intense debate online, with travelers being very vocal about their respective stances about airplane seat reclining etiquette.

NY Times staff writer Josh Barro wrote an opinion piece titled “Don’t Want Me to Recline My Airline Seat? You Can Pay Me,” in which he argues that it is an airplane ticket holder’s individual right to be able to exercise a basic human freedom such as reclining your seat, but if that person reclining their seat bothers you, you should pay up.

On the other end of the debate is Gawker’s Hamilton Nolan, who literally goes against Josh Barro’s argument, saying in his article if you don’t want people to spit on you if you decide to recline your seat, you should pay them.

Yes, you may, if you so choose, recline your airplane seat. Right into my personal space. Making me feel like a man about to die in a tight mine shaft. Condemning me to claustrophobic suffering in order to enhance your own leisure.

In turn, I will spit on you. Spit on you like the wicked person that you are. In the same way that it is your technical right to recline your airplane seat into my lap, it is my technical right to spit—accidentally? Who can tell?—onto your head, and to continue doing so as long as your head is in my personal space, due to the fact that you reclined your airplane seat.

This is the sort of extralegal cause-and-effect functioning that has, over time, enabled us to painstakingly build the outlines of a civilized society.

Don’t want me to spit on you when you recline your airline seat? Pay me.

Twitter users also had their own opinions about the issue, and while the reasoning for (or against) reclining varies, height seems to be a common factor in most complaints.

.@slate and @jbarro are battling it out in my Discover tab pic.twitter.com/cHnboFBeHg

As a very tall person, I would like to register my non-objection to airplane seat reclining. I can always recline too. @jbarro

I’m 6’4” and I’ll be damned if anybody is going to stop me from reclining. Don’t like it? Blame the airlines for cramming people too close

I’ll recline if and when I like. I’m reclining now.

For me, the ability to recline is a matter of religious freedom. So…

I realize this is unpopular thought right now, but if my seat on an airplane can recline I’m going to recline it. Guess I’m a bad person.

I’m with @moneymetalcakes on this one. I never put my seat back unless nobody us behind me. Hate when people do. @EBJunkies @GlassJoeJP.

I have a built-in Knee Defender: my knees. Try to recline all you want. I’m not moving them. You’re only punishing yourself.

Team No One Should Ever Recline On An Airplane

. @caribouwho @adamostrow @nycjim @Slate I break up more fights on the plane over passengers reclining than anything else. Ridiculous. Sad.

People who recline their seats inside those tin cans they shove us into called airplanes, are Satan’s children.

No matter what side of the debate you’re on, the fact of the matter is that if an airplane seat reclines, you cannot always expect the person in front of you to exercise courtesy by either a.) politely asking if it’s OK to recline their seat, b.) agreeing to only recline halfway or c.) not reclining at all.

Sometimes people are just people, and they do what they want when they want how they want where they want. And if their seat reclines, then gosh darnit, they’re going to do it, and you just have to either a.) deal with it or b.) possibly end up on the no-fly list.

Meanwhile, flight attendant Heather Poole, who wrote a book about crazy passengers, among other things, says “It doesn’t matter what anyone thinks.”

She told Mashable, “The fact is passengers are allowed to recline — and they don’t have to ask for permission to do so, even though that is a nice thing to do and relieves a lot of tension.”

Poole said breaking up fights between passengers over reclining seats is common in her line of work, and she also offered some advice for travelers who are worried about the tight space in an airplane.

“If space is so important to you, pay the extra fee to sit at the front of coach where there’s a little more leg room,” she said. “Also, if you are going to freak out because somebody’s all up in your space, do us all a favor and wait until we’re safe and sound on the ground so we don’t have to divert the flight.”

In the meantime, this guy seems to have his priorities in order when it comes to airplane etiquette:

Never mind people who recline airplane seats. People who abuse the carry-on limit are the true sociopaths of the skies.

Which side of the debate are YOU on? Let us know in the comments!