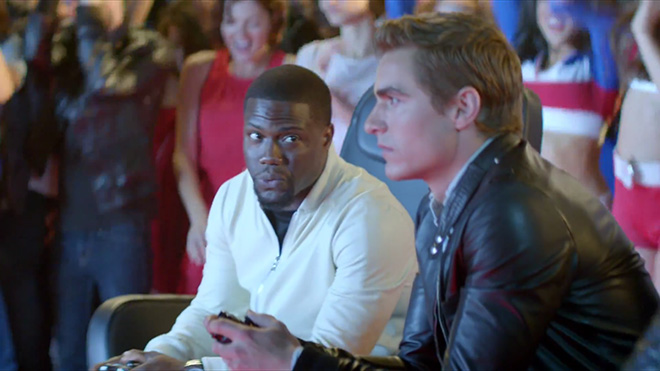 EA Sports released a brand new commercial for Madden NFL 15 today called “Madden Season,” and if we could describe the whole thing in one world, that one word would be INSANE.

The ad stars Kevin Hart and Dave Franco who have a pretty intense Madden rivalry with each other. Hart shows up to Franco’s doorstep and slaps him right in the face and later trashes his car (among other things), all in the name of “Madden Season.”

When the two finally meet up to play, Franco gets so into the game that he doesn’t even care that his house is on fire. “Let is buuuurrrn!!” he shouts.

Look out for appearances from Colin Kaepernick, Dez Bryant, LeSean McCoy, Eddie Lacy, a weird Ke$ha look alike, the video game version of Richard Sherman, as well as the DJ with a bear head that rises out of the pool full of dolphins. (Remember how we told you this commercial was insane?)