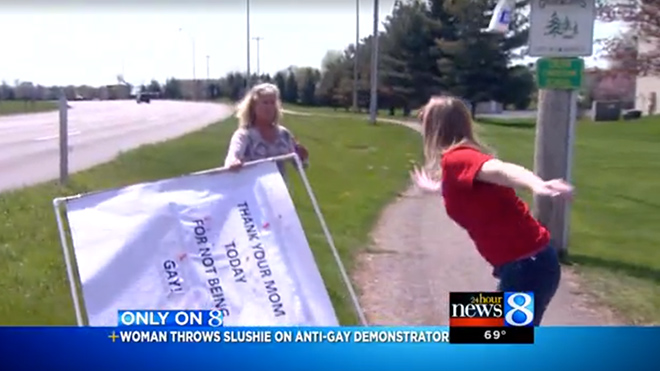 An anti-gay protester used Mother’s Day to spread a message of hate at a busy intersection and ended up getting a slushie thrown at her by a displeased bystander.

Christine Weick — an author from Michigan — was standing at a busy intersection in Grandville, Mich. on Sunday (May 11) while holding a sign that read “Thank your mom today for not being gay.”

NBC affiliate WOOD TV received a tip about the demonstration and sent a cameraperson to the scene, and while cameras were rolling, a woman named Jessica Prince walked up to Weick and threw a slushie right in her face! Weick then threatened to pepper-spray Prince, who flipped her off.

Others also protested Weick’s demonstration with signs of their own, with messages like “Thank your mom if you’re not a BIGOT! Judge not…” and “F**k her.”

“Truth is hate to those that hate the truth, and this is the truth,” Weick told WOOD after the slushie was thrown at her. “They don’t like it and they label me a hater, and it isn’t that at all. I love them enough to tell them they are on the wrong path.”

Weick also wrote about the incident on her Facebook page:

Yes… this was my Mother’s Day. The day was full of surprises too. I did not expect the media to get involved, let alone tape the attack! The young man standing next to me that was holding the f**k her sign actually apologized and changed the sign after a number of people scolded him. Please pray for Zack as I was able to share the Gospel with him.

Weick is the author of the book “Explain This! A Verse by Verse Explanation of the Book of Revelations.”

Back in March, she protested the trial to overturn Michigan’s ban on gay marriage with a sign that read, “Warning! God draws a line on gay marriage.”

Christine Weick, who claims to be a born-again Christian, believes that same-sex marriage is the “core degradation of our society.”