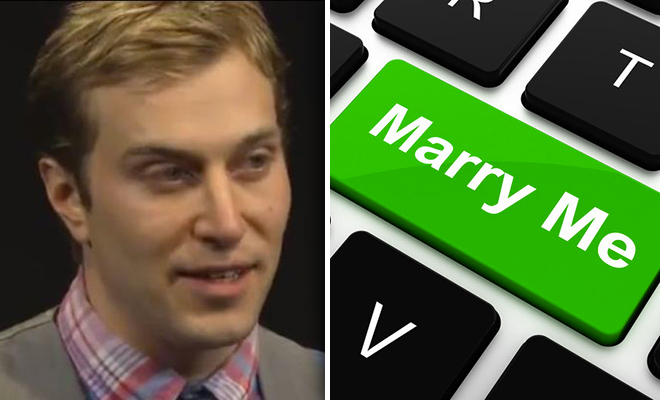 Sevier filed a motion on behalf of “other minority sexual orientation groups,” and in the 24-page document, Sevier asserts that if gay couples “have the right to marry their object of sexual desire, even if they lack corresponding sexual parts, then I should have the right to marry my preferred sexual object.”

Here’s an excerpt from part of his court filing:

Recently, I purchased an Apple computer. The computer was sold to me without filters to block out pornography. I was not provided with any warning by Apple that pornography was highly addictive and could alter my reward cycle by the manufacturer.

In case you haven’t caught on yet, it’s obvious that this guy is trolling the f**k out of the Florida judicial system. He’s basically arguing against gay marriage, but at least he’s at least being creative with it.

Short on sound legal grounding (and even shorter on wit), Sevier’s filing is obviously an attempt to punk the legal system because he doesn’t agree with gay marriage (as he says in the filing, “sexual orientation” never existed as a classification until President Obama came along to advance his “social agenda to make America a ‘gay nation.'”

Sevier says he’s here to make the courts “put up or shut up” on the equal protection argument upon which the push for gay marriage is based. He obviously thinks his obnoxious argument makes some point.

This isn’t the first time Chris Sevier has filed a ridiculous lawsuit.

And just recently, Sevier filed a 50-page motion intervening in a Utah gay marriage case, declaring himself a “patriot with standing” and asking the appeals court to “put up or shut up” about expanding equal protection to sexual minorities. In that case, Sevier described his failed attempts to obtain a marriage license for himself and “a machine.”

In this Florida case though, the federal judge manning the gay marriage case has reportedly tossed it for now.

Judge Robert Hinkle wrote in an April 24 ruling, “Chris Sevier has moved to intervene, apparently asserting he wishes to marry his computer … Perhaps the motion is satirical. Or perhaps it is only removed from reality. Either way, the motion has no place in this lawsuit.”

Looks like Mr. Sevier won’t be able to make an honest machine out of his Macbook after-all.