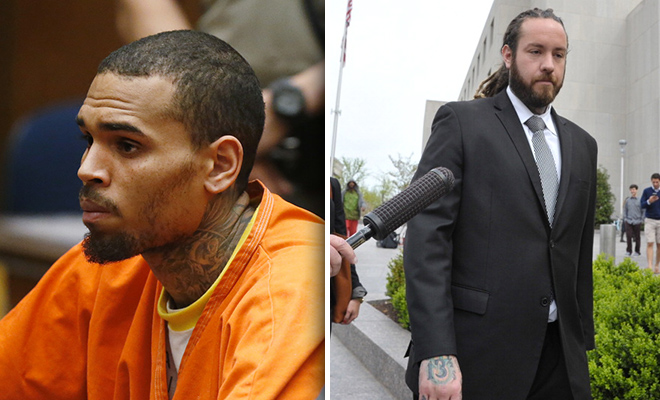 Chris Brown‘s assault trial has been postponed until Wednesday (Apr. 23) after the singer’s bodyguard Christopher Hollosy was found guilty of misdemeanor assault this morning.

20 year-old art student Parker Adams accused Brown and his bodyguard of punching him and breaking his nose outside of the W Hotel in Washington, D.C. during Howard University’s homecoming last October. Adams is suing Brown and Hollosy for $1.5 million.

CNN reports Howard University student Jalen Garrison testified in the case claiming that she and a friend were taking a picture with Brown when Adams tried to take his own pic with Brown. Brown allegedly got angry and attacked Adams yelling, “I don’t like that gay sh*t!”

A limousine driver also testified and witnessed to have seen both Brown and his bodyguard punching Adams, who didn’t hit either of the men back.

Brown’s bodyguard (Hollosy) admitted in court that he punched Adams after he tried to get on Brown’s tour bus, but the judge still found him guilty.

Hollosy has decided to appeal his conviction and will no longer be a key witness in Brown’s trial … which makes sense as to why it was pushed back.

Hollosy’s sentencing will be on June 25th, and he faces up to six months behind bars.

Brown’s trial in D.C. will go down on Wednesday, and if the judge finds him guilty of misdemeanor assault, his probation (for his 2009 Rihanna assault case) will be revoked and he could face up to four years in jail.

We have no clue how this is going to play out, but Breezy better be doing some serious praying within the next day or so…