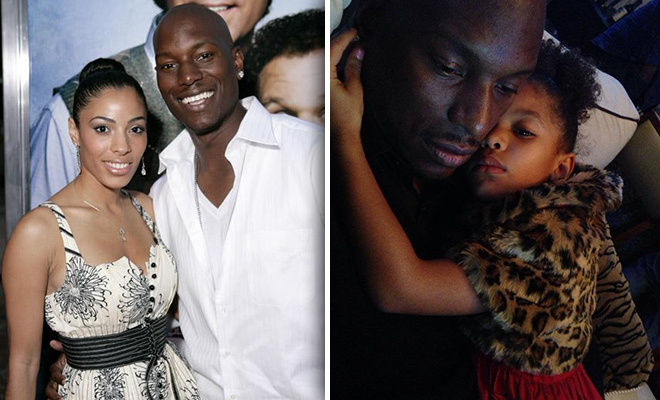 Tyrese‘s ex-wife Norma Gibson must still be butt-hurt over getting $0.00 in their divorce settlement, or something … because the two are now entangled in a nasty custody dispute over their 6-year-old daughter Shayla after the police were called when Norma refused to allow Tyrese to see his own child.

According to TMZ, in what he thought was going to be a normal “custody exchange,” Tyrese went to Norma’s home in North Hollywood Tuesday night (Feb 11) to pick up their daughter.

But when Tyrese got there, the actor/singer and part-time Twitter philosopher was told that the girl was “sick” and he wouldn’t be able to take her with him.

Police were called and they spoke to the 35-year-old singer, and he eventually agreed to leave without the child, apparently without any incident.

But Tyrese ain’t no fool, and he believes the whole thing was orchestrated by Norma as revenge, and their daughter wasn’t sick at all. So now he’s asking a judge to hold Norma in contempt and throw her in jail for violating their court-mandated custody order.

“Norma Gibson, Tyrese’s ex-wife, denied him a court custodial order with their daughter Shayla on Feb. 11, 2014. Tyrese arrived to pick up Shayla and was denied access by her mother. Mr. Gibson called the police to the scene, and Mrs. Gibson called TMZ.

“Sadly, this is not the first time this has happened. This has been an ongoing saga. Tyrese filed a 730 [custody] evaluation with the courts in 2013, and the family will face a court-sanctioned evaluation this month.

“Hopefully this will end this ridiculous feud and Shayla can return to a comfortable environment.”

Tyrese and Norma were only married married for 10 months, and as we reported way back in 2009 when they were divorcing, she didn’t receive a SINGLE RED CENT, other than the $6,230 a month she gets for child support.

That’s because of an iron-clad prenup that they both signed, stating that if they were to ever divorce, Norma wouldn’t get a piece of any of Tyrese’s possessions, including his production companies, his luxury vehicles, his homes, etc.

In the event of divorce, the only thing she would get was a lump sump of $50K for every year they were married, for up to 10 years … but since were two months shy of a year when they divorced, Norma got NOTHING.

Nowadays she’s trying to squeeze more money out of Tyrese. In addition to the $6.2K/mo he pays in child support, Tyrese also covers his ex-wife’s rent, as well as her car lease and ALL of Shayla’s expenses.

But apparently that’s not enough for Norma, because just last September, she went to court asking for more money, but the judge ruled against her in favor of Tyrese.

Norma, being the spiteful woman that she is, also filed court documents earlier this year, claiming that Tyrese is a bad father because he didn’t spend time with their daughter for two weeks.

But Tyrese was in fact in Dubai on business to play four gigs over New Years, to, you know, MAKE MONEY; the same money he uses to support her and their daughter.

Everyone who follows Tyrese on social media knows how much of a dedicated father he is, as he is constantly sharing photos of his adorable little girl and telling everyone how much he loves her.

He even shared this open letter to his daughter, likely as a response to her mother saying he refused to spend time with her, when in fact, he was working:

We don’t know about you, but these don’t sound like the words of a negligent father to us…