GOSSIPONTHIS.COM Pop Culture These Idiots Think “Trayvoning” Is So Cool, But It Is So Not 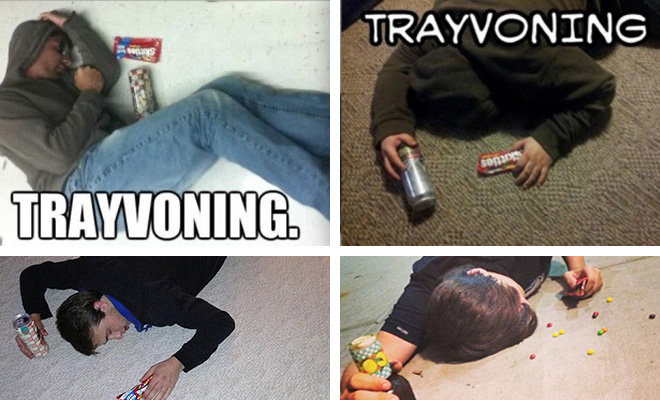 Last year, a disturbing Internet meme known as “Trayvoning” began to crop on on social media sites, as users posted pictures of themselves “playing dead” by posing lying on the ground with a bag of Skittles iand a can of Arizona iced tea nearby.

After MSNBC accidentally showed a graphic image of Trayvon Martin’s lifeless body lying in the grass after he had been shot and killed by George Zimmerman on live television, the hateful trend has reappeared on Twitter. How progressive!

As The Inquisitr put it, “Trayvoning Is Like Tebowing, But Horrible.”

Take a look at some of the disturbing images here: While some idiots think “Travoning” is funny and/or cool, most do NOT find it neither funny nor cool. Here’s what people with some good damn sense in their heads wrote on Twitter:

So people are “Trayvoning”??? Not even funny. Very disturbing and disrespectful.

I can’t even fathom what I would do if I saw some “trayvoning” on the street.

I’m seriously disturbed and disgusted by this “Trayvoning” trend.