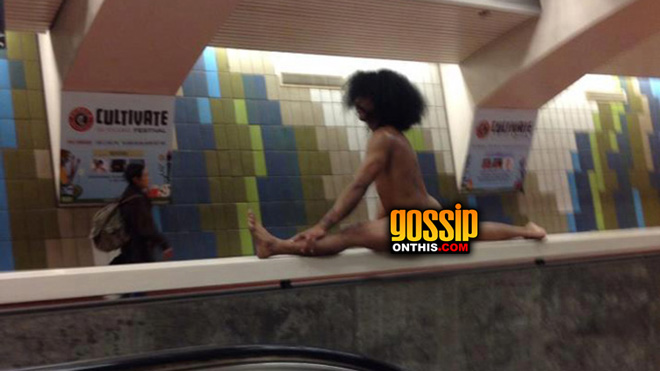 About a month ago, a “naked, spitting, pissing” man — who appeared to be under the influence of some type of heavy drug like PCP — was reportedly seen attacking passengers inside San Francisco’s 16th Street Bay Area Rapid Transit (BART) station, and video footage has emerged showing the ordeal … and it’s pretty intense, to say the very least. The NSFW video, which was uploaded to YouTube and has been posted on various sites like Gawker and WorldStarHipHop, shows a completely nude man with wild hair chasing after a woman.

The woman, screaming for help, falls to the ground, but is eventually able to get away and take refuge in the ticketing booth, thanks to a station agent who called her over, all while filming the incident and calling for help from the police — who seem to take forever to respond. Other instances in the clip show the naked man performing acrobatics on top of the railings and fare gates, and doing some crazy leg-kick on top of a newsstand before cutting a flip from it and landing right on his feet. By the end of the 3-minute video, he’s flopping around all over the floor as BART passengers, apparently immune to crazy metro station antics, walk by as if he isn’t even there — though one guy riding on a bike comes out of nowhere and just taps the guy right on the butt with his foot. The whole thing is pretty bizarre, and you just have to see it for yourself, but we warn you, it is definitely NSFW, seeing as, you know, the guy is buck naked.

Here’s a safe for work version: