When did all this happen???

According to sources, NBA star Shaquille O’Neal has proposed to VH1 reality show star Hoopz! The two have recently been spotted out a together having  a lot of fun….however we had no idea it was this serious.

Eye witnesses say that Shaq and his new girl Hoopz were last spotted at a hookah spot in St. Louis where Shaq was allegedly overheard proposing to Hoopz. And the owner of the Sahara Mediterranean Cuisine and Hookah Lounge confirmed that he heard the basketball star propose to the TV star on the dance floor of the St. Louis bar.

It does make sense though…Shaq getting married to a girl named Hoopz! How ironic…LOL 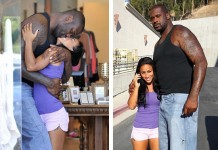 Boo’d Up: Shaq and Hoopz Spotted Out in Calabassas, California [PHOTOS]