The music video for “We Are the World: 25 for Haiti” debuted Friday night (Feb 12) during the opening ceremony for the 2010 Winter Olympics in Vancouver.

This version of the song, featuring vocals from Justin Bieber, Jennifer Hudson, Lil Wayne, Janet Jackson, Miley Cyrus, Jamie Foxx, Mary J. Blige, Kanye West, T-Pain, Usher, Wyclef Jean and much more, is much more contemporary than the original but it fits today’s music era. The song’s original writer and singer Michael Jackson also appears in the song and video (his sister Janet sings the first chorus with footage of Mike thrown in). They also kept one of MJ’s original parts and show footage of him singing it (Nice!).

The 25th Anniversary recording features over 80 artists and performers. The recording of We Are The World 25 For Haiti embodied the same enthusiasm, sense of purpose and generosity as the original recording 25 years ago. Every one of the artists who participated, regardless of genre or generation, walked into the room with their hearts and souls completely open to coming together to help the people of Haiti.

The video shows footage of Haiti and the efforts surrounding its repair, along with footage of the artists mentioned above and more recording the song in the studio. Check it out below… 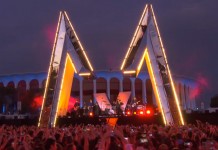 Adam Levine & Maroon 5 Take the VMAs Outside to Perform “Maps”