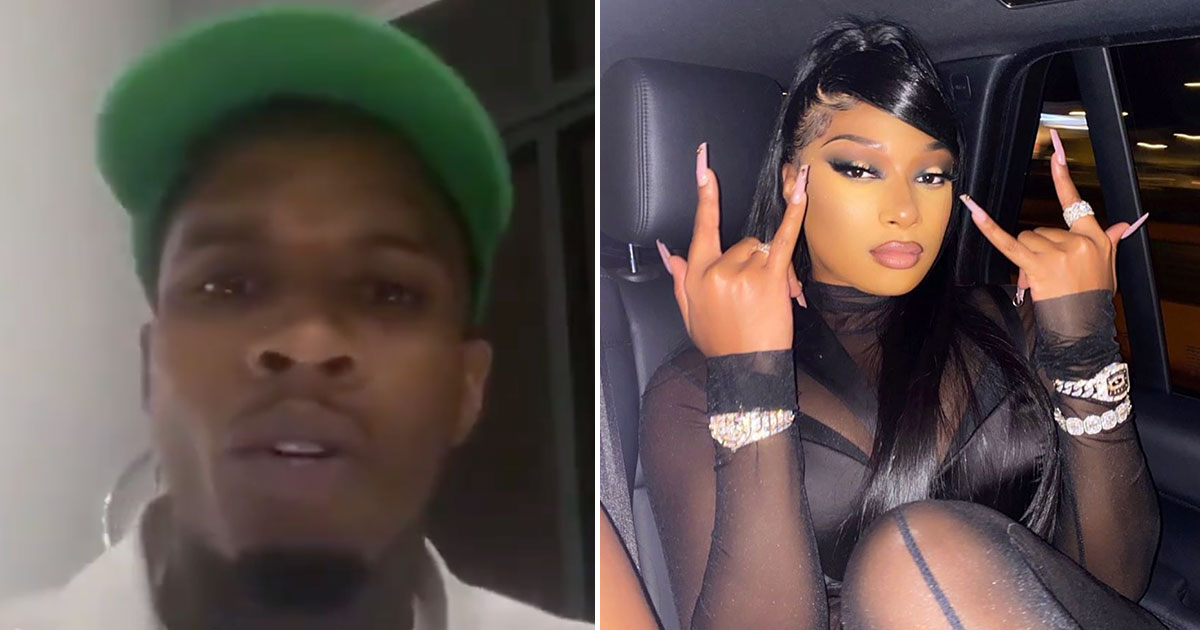 Tory Lanez took to Instagram Live Tuesday night (Oct. 20) in yet another desperate attempt to clear his name in regards to the shooting of Megan Thee Stallion … which she claims he did and he (kinda sorta) claims he did not.

Complex has the story:

The Canadian rapper insisted the allegations against him are “not true” and tried to discredit Megan’s claims that he had shot her in the feet during a July 12 altercation. He pointed to TMZ’s initial report that confirmed he had been arrested in Los Angeles for possession of a weapon.

Megan, her friend, and his body guard were reportedly riding in the vehicle shortly before Lanez’s arrest; however, the first reports made no mention of Megan sustaining gun shot wounds.

Lanez said he had planned to make a public statement on the matter, but was advised against it.

“Two days after that, I get a call from Roc Nation that says, ‘Yo, we heard you were gonna to make a statement about what happened, and it’d be in your best interest if you don’t make that statement,'” he said. “And I’m like, OK? I don’t understand the issue of me telling my fans, like, ‘Yo, it’s not that serious of a deal …'”

He also pointed to subsequent reports that stated Megan was treated for injuries that were believed to have been caused by shattered glass: “Nobody has ever said she got shot,” Lanez said, referring to early reports.

More than a week later, Megan shared an Instagram post of her injuries and claimed she had been shot. The Houston rapper said the bullet wounds were “a result of a crime that was committed against me and done with the intention to physically harm me.”

It’s important to note that Complex has reviewed Cedars-Sinai medical records that support Megan’s claim; doctors reportedly found shrapnel in her heel shortly after the incident. Lanez did not address this fact, and instead focused on the early reports that made no mention of bullet injuries.

He also stated that Megan claimed she was shot in the feet as she was walking away from the vehicle, which means she did not see who allegedly fired the shots. He also questioned why Megan never revealed she was a victim of a shooting when police arrived at the scene.

Megan explained her reasoning in an Instagram video, in which she outright accused Lanez of shooting her. She said she was too afraid to initially tell police what really happened because it could’ve ended in more blood shed.

“The police come, I’m scared. All this sh** going on with the police? The police is shooting motherf**kers for anything,” she said. “The police was literally killing Black people for no motherf**king reason … You think I’m about to tell the police that we—n***as, us Black people—got a gun in the car?

Lanez went on to claim he has always “showed out for Black women” and still considers Megan a friend despite all the “false information.”

Lanez went on to quibble about varying points of the shooting, though he never outright said whether or not he shot Megan.

During Tory’s IG Live rant, Megan took to Twitter to call him out for being “genuinely crazy.”

Twitter seemed to agree with Megan … also pointing out that he talked in circles without explicitly saying whether or not he pulled the trigger.

Tory Lanez explaining his side of the story pic.twitter.com/120wPb5UgI

Notice how Tory Lanez is talking in circles but not ONCE did this abuser refute the claim that the bullet fragments found in her foot was from his gun – the reason why he now faces one count of ASSAULT with a semiautomatic handgun. This isn’t helping his case at all. He’s sick https://t.co/hRNbj0Eiwz

if you believe anything tory lanez has to say i’m just going to assume you’re a brain dead idiot . anyway i hope meg has a good day <3

Tory’s latest attempt to clear his name comes just a few weeks after he released his album Daystar, on which he addressed the shooting in a series of songs, asking at one point: “How the f**k you get shot in your foot, don’t hit no bones or tendons? How the f**k your team is tryna to paint me as some whole menace?”

Lanez was accused of shooting Megan back in July after a party the two attended at Kylie Jenner’s house. He was charged on October 8th in connection with the incident and faces up to 22 years in prison.

After Lanez was charged, he tweeted: “[Time]” will [tell] … and the truth will come to the light … I have all faith in God to show that … love to all my fans and people that have stayed true to me & know my heart … a charge is not a conviction. If you have supported me or meg thru this, I genuinely appreciate u.”

? will ? … and the truth will come to the light … I have all faith in God to show that … love to all my fans and people that have stayed true to me & know my heart … a charge is not a conviction . If you have supported me or meg thru this , I genuinely appreciate u .

For her part, Megan wrote about the experience in an op-ed for the New York Times last week.

“Even as a victim, I have been met with skepticism and judgment,” she said. “The way people have publicly questioned and debated whether I played a role in my own violent assault proves that my fears about discussing what happened were, unfortunately, warranted.”